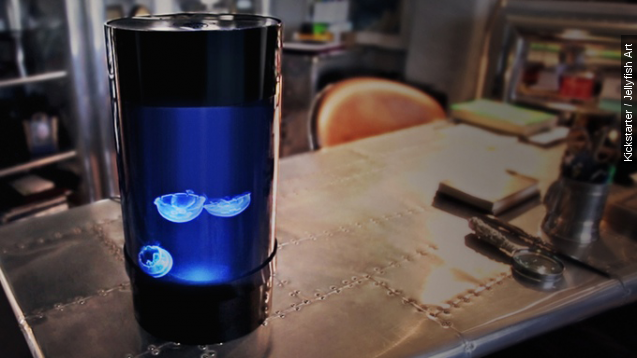 Due to their temperature sensitivity, caring for jellyfish is hard. One Kickstarter is aiming to fix the problem with a temperature-controlled tank.

Having a pet jellyfish is cool.

"Fetch," said Spongebob SquarePants. "How many fingers am I holding up?" he asked.

But there's a problem: The squishy creatures are quite sensitive to temperature change. It's not easy to keep a jellyfish as a personal pet.

Now there's a Kickstarter project that wants to solve the problem.

"Introducing the Jellyfish Cylinder Nano, the easiest and most affordable aquarium that makes jellyfish keeping simple for anyone," said the narrator in a Jellyfish Art advertisement.

The Jellyfish Cylinder Nano aquarium is temperature controlled, mimics ocean currents, filters water and uses LEDs to give color to the jellyfish.

"Hey, I'm Vanilla Ice and I'm here to tell you something really cool: jellyfish, real jellyfish. Now you can bring it to your house anywhere in the country," said Vanilla Ice.

The Kickstarter is fully funded. But the first tanks aren't expected to ship until February.

Just remember: Crowdfunding is as risky as being around a jellyfish. If the aquarium doesn't get shipped, you could lose money. That stings.