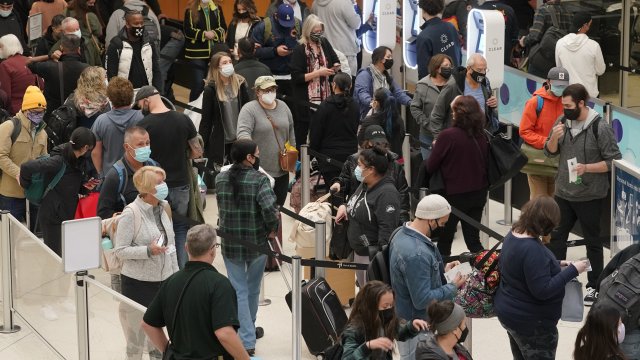 Heartwarming reunions have been a common sight at airports nationwide ever since the U.S. reopened borders to fully vaccinated travelers last month.

But that was before more variants hit the globe. While there are no travel restrictions in the U.S. currently, Omicron is disrupting international travel once again and forcing people to cancel long-awaited trips and holiday reunions.

Belgian grandmother Pauline Scheiner has been waiting for months to see her daughter and grandchildren who live Israel.

"We are quite uncertain, and I'm afraid we're not going to be able to go," Scheiner said. "It's very important for us because we haven't seen the grandchildren for quite a while."

The trip she planned long ago for Christmas is now in flux after Israel banned foreigners from entering the country due to Omicron.

"Every time we are excited to go, we think, 'Ok we can do it,'" Scheiner said. "We book a plane, we book the hotel and then... again, not certain."

The rapidly-spreading variant has triggered new travel restrictions worldwide with Israel, Japan and Morocco going as far as shutting down their borders to non-citizens.

For many, the latest round of restrictions - nearly two years into the pandemic - is too much to bear.

"I feel quite depressed from the whole situation," Scheiner said. "I don't see the end of it."

Others say they try to stay positive.

D.C.-based Ian Tang and his partner have been waiting the whole pandemic to travel internationally again.

"There's still a lot of fun to be had, even if you can't get to some of those bucket list items," Tang said.

They felt that this winter would be the right time to do it, but their new year trip to Morocco has now now been canceled.

"We really waited until the month before to decide and thought, you know, we would pick a country that was pretty based on tourism, would likely not take any drastic measures to cut off traveling, but here we have Omicron," Tang said.

They also booked a January trip to Japan because flights were dirt cheap, but that trip has also been indefinitely postponed.

Tang says he remains upbeat partly because he didn't lose money in the process — as many airlines have waved change fees at the beginning of the pandemic.

"It's just looking forward to those things rather than feeling impatient and feeling like you're missing out," Tang said.

Still, being able to postpone flights for free offers little consolation to those, like Scheiner, who thought they'd finally see their loved ones this holiday season.