Venezuela's Guaidó Claims To Have Military Support. Does He? 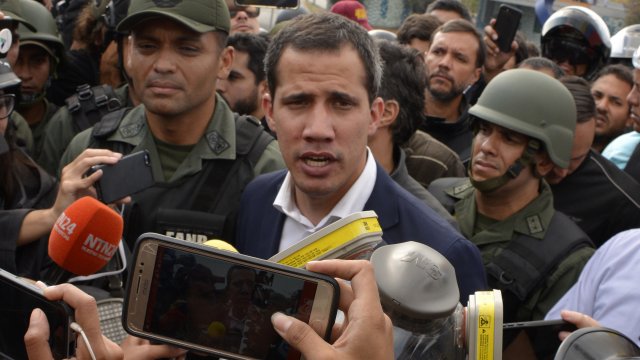 The success of Venezuelan opposition leader Juan Guaidó's call for an uprising will depend on whether he gain the support support of the military.

Venezuela's opposition leader Juan Guaidó is staking his latest bid to wrest power from the country's president, Nicolás Maduro, on support from the Venezuelan military.

Guaidó released a call-to-arms video on Tuesday which appeared to show he had some backing from Venezuela's military. Former opposition leader Leopoldo Lopez, who was put under house arrest by Maduro, also appears in the video – signaling that Guaidó has enough clout to free Lopez, at least temporarily.

Guaidó's been able to mobilize massive popular demonstrations and international support to his side, but so far Maduro's managed to weather the pressure, thanks in part to his control over Venezuela's military.

Guaidó and his allies have been encouraging military defections from Maduro's regime for months: last month neighboring Colombia said over 1,000 Venezuelan soldiers deserted and fled across the border.

In a series of tweets, Guaidó called on Venezuelans to "go out together on the street, to support the democratic forces and to recover our freedom."

But the defectors have been mostly isolated and disorganized units: the bulk of the country's military has stayed loyal to Maduro, partly out of fear of reprisals and a lack of confidence in Guaidó's attempt to take over.

Violent clashes broke out between Guaidó's supporters and Venezuelan security forces in the country's capital Caracas after the video was released. The country's information minister said the government was dealing with a coup attempt by "a small group of traitor military personnel."

Guaidó argues Maduro's claim to power is illegitimate, and he has been recognized as Venezuela's official president by the U.S. and dozens of other nations. Both Guaidó and Maduro have called for their supporters to rally in the streets following Tuesday's conflict.