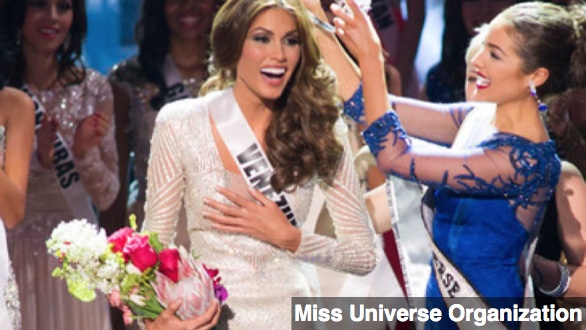 And the Miss Universe crown goes too …

Talk about one stunned reaction. (Via WPLG)

According to NBC, Isler, “didn’t realize she had the won until last year’s winner, Olivia Culpo, awarded her the crown with a bouquet of red roses.”

And in all that chaos, Isler nearly lost her crown, but caught it without losing her cool — just laughing it off like you would expect from a beauty queen. (Via Herald Sun)

Twenty-five-year-old Isler is from the northern city of Maracay. In her time spent off the stage, she was a TV presenter for Venezuela’s Venevision television, which according to the Huffington Post is “a background that will suit her well for her year-long stint as Miss Universe.”

Now, Venezuela has taken home the top spot before.

In fact, Isler follows a long line of Venezuelan Miss Universe titles. She became number seven, making Venezuela only second to the United States, which has had eight winners in the last 60 years of the event. (Via Latinos Post)