Venezuelan Elections Bring New Hope But Will Anything Change? 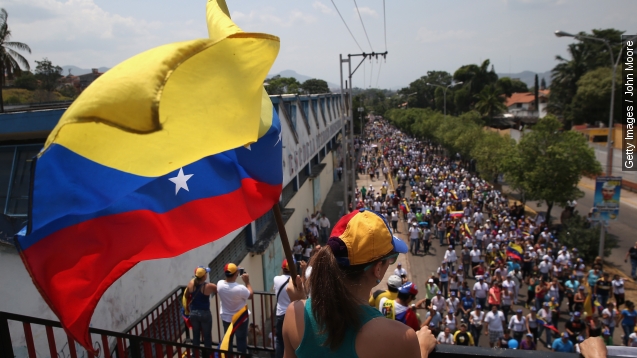 Venezuela looks like it will have a new majority party for the first time since 1998, but will its leaders be able to correct the failing economy?

For the first time since the 1990s, Venezuela could have a major shift in political power. But it still might not be enough to pull the struggling South American nation out of its rut.

The Venezuelan economy is largely dependent on oil, deriving 95 percent of its exports from oil & gas according to OPEC. Dropping oil prices hit the country especially hard, causing hyperinflation and a 10 percent contraction in the country's economy.

Citizens are desperate for change, and the opposition party, Democratic Unity Roundtable, is polling well. It's projected to win a majority of the 167 parliamentary seats, according to Datanalisis. But the party is still facing an uphill battle. (Video via TeleSur)

For one thing, the ruling socialist party may take the election as more of a suggestion to leave office. President Nicolas Maduro said in a campaign speech, “I know we are going to triumph, but if there are negative circumstances, I will go to the streets and fight with the people." And It's not just empty talk. (Video via Venezolana de Televisiòn)

Political dissenters have been consistently stifled. One opposition leader was gunned down at a rally in November and another received a 14 year jail sentence for allegedly inciting violence, a conviction that’s drawn criticism from international human rights groups like Human Rights Watch. (Video via Univision)

And some third party groups that monitor elections, like the Organization of American States, have been barred from vetting the fairness of the vote.

Maduro's presidential term runs until 2019, so it could be difficult to get anything done with one party controlling the legislative branch while another holds the highest executive office. But he could be ousted with a referendum vote as early as 2016.

Even if Maduro is removed next year, that still leaves the opposition party with a lot of work to do in fixing the economy. Work it may not be equipped for.

The Washington Post reported members of the opposition are worried they “haven’t succeeded in uniting around a common vision on how to govern, beyond confronting Maduro.”