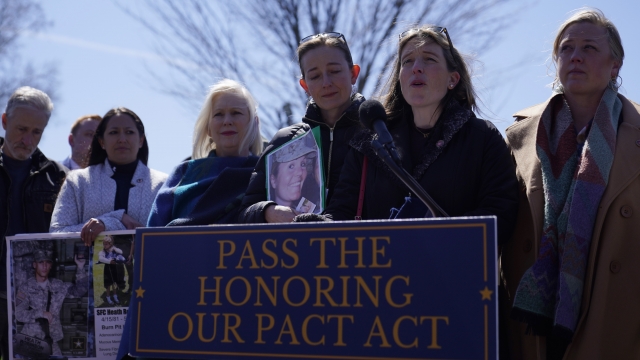 Republicans are being pressured by veterans to rethink passing the PACT act bill, which will extend healthcare benefits.

Congress is desperately trying to put out a political fire that has many questioning their commitment to American veterans.

It's a sentiment shared by many who've served after 25 Republican senators blocked a bill to extend healthcare benefits for the millions of veterans exposed to toxic burn pits in Iraq and Afghanistan.

Democrats are already blaming Republicans for any delays in veteran care. Still, Senate Majority Leader Chuck Schumer assured veterans a re-vote on the PACT Act will happen this week.

But Republicans like Senator Pat Toomey say Democrats are using the PACT act as a "vehicle for massive unrelated spending binge" something he says adds up to the tune of $400 billion in mandatory spending.

"This is the oldest trick in Washington. People take a sympathetic group of Americans and it could be children with an illness. It could be victims of crime. It could be veterans who've been exposed to toxic chemicals, craft a bill to address their problems and then sneak in something completely unrelated that they know could never pass on its own and dare Republicans to do anything about it," Toomey said.

Republicans want an amendment to the PACT act that would cap what can be spent each cycle.

But the head of the VA says that would have drastic results for future care.

Denis McDonough is the U.S. Secretary of Veterans Affairs.

"If his estimations are wrong about what we'll spend in any given year, that means that we may have to ration care for veterans. And by the way, that's not something I'll sign up to," McDonough said.

It's a claim Senator Toomey denies; saying in part, "nothing in my amendment results in one dime reduction in spending for health care or other benefits for veterans."

Some Senate Republicans are working fast to wrap up the back-and-forth and change that narrative. On Sunday, Senator Jerry Moran tweeted in part, "the most important business before the United States Senate is passing the PACT act for our nation's veterans," and hoped to get the bill passed "as quickly as possible."

Still, advocacy groups, like the Veterans of Foreign Wars, warn lawmakers it "will hold them accountable if they fail to honor their promise."

In the meantime, veterans advocates are staying on the steps of Congress. And they encourage lawmakers to stay inside and pass the PACT act.

"Keep the lights on, keep the doors open and don't leave here tonight until you do the right thing by these folks. Simple as that, don't make this harder than it is," said comedian Jon Stewart.