Veterans Are Outraged Over Handling of Afghanistan Evacuations 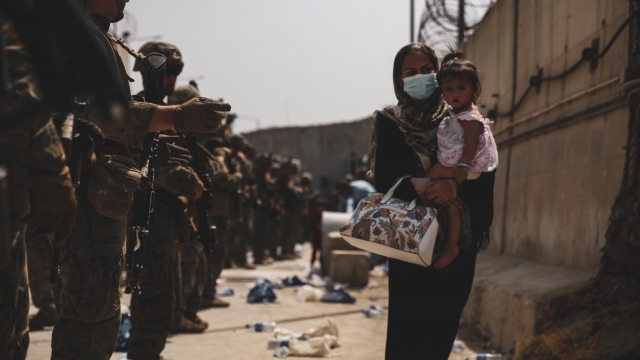 The Department of Veterans Affairs says there has been an uptick in its crisis hotline since the U.S. pulled out.

The 20-year war in Afghanistan is officially over for the U.S. But for those who fought there, America's military veterans, there are mixed emotions about how we left and how it will all be remembered.

"I think it was a total disaster. I really do," Army veteran Andrew Briones said.

The Department of Veterans Affairs says there has been an uptick in calls to its crisis hotline since the U.S. pulled out. Calls are up seven percent, online chats are up 40 percent and texts to its emergency service are up a reported 98 percent in August compared to a year ago.

For some vets, the end has them frustrated.

"I'm not saying we should have stayed, you know, I would love for us to have been out," Briones said. "But there's always different ways to do things."

Briones says he lost many friends while deployed in Khost Province from 2012 to 2013, but recent military actions in the region made him feel it was all in vain.

"We feel like we've been forgotten. Everything we did was just forgotten," Briones said.

In June of 2010 Ritter deployed to Logar Province. He feels the military should have left the area decades ago.

"We should have left, right after Osama bin Laden was killed," he said. "I was in Afghanistan the night that Osama bin Laden was killed in Pakistan. And the locals, along with the Taliban, are out in the streets, you know, cheering as they, they thought, you know, the mission was accomplished for America. The service members, we thought our mission was accomplished, too. So we were just waiting for the word of when to leave."

The U.S. military and allies were successful in evacuating nearly 125,000 Americans, immigrant visa holders and their families officially ending the two-decades-long war. However, hundreds were left behind.

"It's infuriating," Briones said. "Because when we start, when we first joined the military, you know, we have four laws that we live by. And, and the very last one is never leave a fallen comrade. And yet, the Department of Defense, the United States military, they teach us these things. From day one, it's drilled in our head, I always placed the mission first, I will never accept defeat, I would never quit, I will never leave a fallen comrade. And then when you turn around, and simply forget about that, and you just leave."

“I think, Terace, we have been very clear that we don't believe the effort has concluded. The military mission of evacuation is over," Pentagon press secretary John Kirby said. "We know that there are people we didn't get out American citizens, as well as immigrant visa applicants. And the U.S. government is going to continue to look for ways to help them find safe passage out of the country."

Eight hundred thousand American military members served in Afghanistan over 20 years. Twenty thousand were wounded. Two thousand three hundred and fifty-two were killed. The man who sparked this war – Osama Bin Laden – now dead. But behind those numbers is a nation with a lot of questions about the cost of it all.