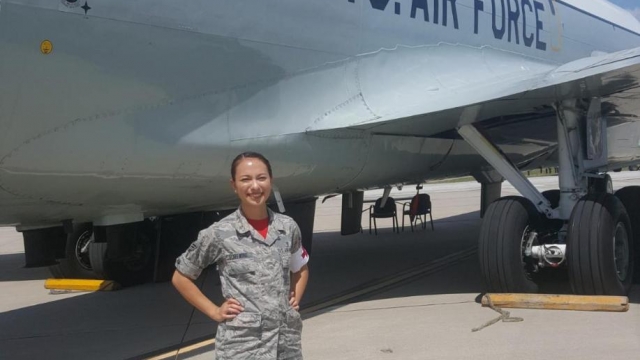 The bill would get rid of policies of punishing reporters for "collateral misconduct," like underage drinking, if they report a sexual assault.

Christina Portwine hadn't been at Offutt Air Force Base in Omaha, Nebraska, a week when she was sexually assaulted by another airman.

"I'm not, like, a huge drinker, but I was drinking to include myself with the crew. I ended up passing out at his apartment that night. I fell asleep on his couch. And the next thing I remember was [a fellow airman] picking me up and carrying me into his bedroom," she said. "He would not let me choose. No, I kept saying no, and he wouldn't take no for an answer."

At the time still a teenager, she says she repressed the experience until rumors started that forced her to confront what happened. She confided in her female supervisor, who told her she didn't believe her and to suck it up. The same woman later told Christina she'd have to work one-on-one with her attacker and the only way to avoid it was to report the assault. She did, just as she was being named Airman of the Year.

Reporting was something Christina had never planned to do. After an investigation ensued, her attacker was cleared, but it was Christina who was punished with an Article 15 for underage drinking. It's the highest level of punishment before a court martial. The Air Force docked her pay and suspended her rank, and she lost her GI benefits while a student in Omaha.

While appealing this punishment to no avail, Christina was diagnosed with PTSD, anxiety and depression. It was after her appeals were denied that she sought help from congressman Don Bacon, a former airman himself, who once served at Offut and, as a five-time commander, had dealt with similar incidents.

Bacon helped restore Christina's benefits and get her an honorable discharge, and with that she just graduated from school in Florida with a degree in political science. With her in mind, Bacon authored the Safe to Report Act with a bipartisan team that ensures survivors will not be penalized for "collateral misconduct" like underage drinking if they report.

"If folks realize that you're vulnerable to get some kind of charge for underage drinking, they can exploit that," explained Congressman Bacon. "If you don't deal with this in the military, at some point they get out and then they're civilians and they're preying on other people. We have an obligation, the military, to deal with this directly where we see it."

The bill, passed by the House and Senate in the National Defense Authorization Act, was vetoed by the president Wednesday. Congress is expected to override the veto after the holidays. Christina says she hopes her experiences pave the road for more women to come forward.

"More incredible women will have the opportunity to excel in the military. I didn't get that chance, but I hope someone else does."