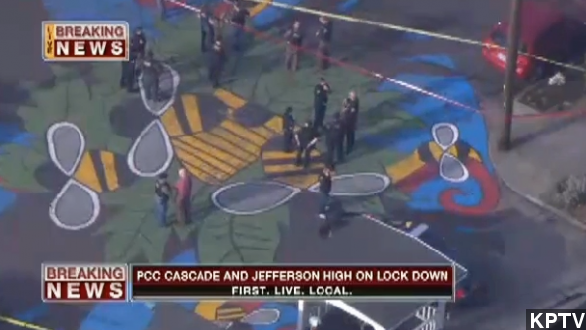 One person is in critical condition and two more are in serious condition following a shooting at a Portland high school Friday.

Authorities have released the status of the three people who were shot outside of a Portland, Oregon high school Friday.

KPTV reports a 16-year old girl is in critical condition, and a 17-year-old boy and a 20-year-old man are both in serious condition after a shooter opened fire at Rosemary Anderson High School. That outlet also says a fourth woman was grazed in the shooting, but was treated and released at the scene.

Portland police are still looking for the shooter and they told local media they believe the shooter has gang ties.

According to The Oregonian, police say that a dispute led to the shooting. It's still not clear if the dispute was gang related.

The shooting reportedly happened as students were walking out the front door for lunch. Local reporters have said there was one shooter accompanied by two other people.

"All of a sudden I hear 'pop, pop' at first I thought somebody dropped something in the kitchen and all of a sudden here somebody yell: 'He's shot, he's shot!,'" one student told The Oregonian.

Rosemary High School is a small, alternative school in North Portand with just under 200 students.