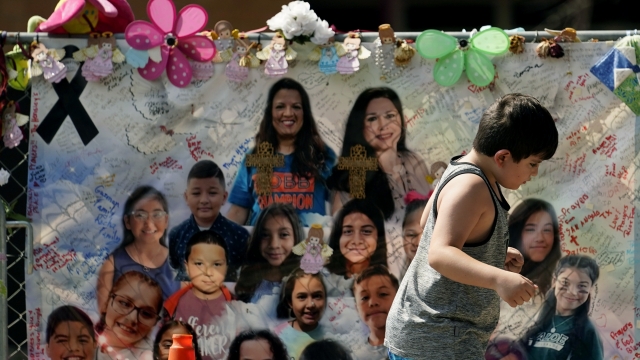 For the first time we are getting a detailed look at what happened outside classrooms 111 and 112 at Robb Elementary School in Uvalde, Texas.

EDITOR'S NOTE: Surveillance video from inside Robb Elementary School was originally due to be released to the families of the victims on July 17. On July 12, the Austin American-Statesman and KVUE chose to publish two edited versions of the video. In explaining their decision to publish ahead of the families’ scheduled viewing, the outlets said, “We have to bear witness to history, and transparency and unrelenting reporting is a way to bring change.” After careful consideration Newsy determined the Austin American-Statesman and KVUE’s early publication necessitated our reporting as well. With legitimate questions about the effectiveness of law enforcement’s response, these videos — difficult as they are to watch – are critical to the public’s understanding of the truth.For the first time we are getting a detailed look at what happened outside classrooms 111 and 112, where 19 students and two of their teachers were murdered seven weeks ago. A warning: it is difficult and disturbing to watch. Surveillance video obtained by the Austin American-Statesman and KVUE begins by showing the gunman crash his truck outside Robb Elementary in Uvalde, Texas. He fires shots at two civilians who respond to the scene. The video then shows the gunman entering the school, calmly walking the halls even flicking his hair as he turns the corner. He targets classroom 111 and within seconds, there is rapid gunfire.   Within minutes, the initial wave of police officers arrive, appearing to be Uvalde police, Texas state troopers and Uvalde sheriff deputies. They stay in the hallway. The video shows the moment the gunman fires at two police officers attempting to breach the classroom door. That’s four minutes after he entered the school. But for the next 70 minutes no officer attempts to enter the room.Instead police officers continue to arm themselves as more ballistic shields are staged. Later, officers hear gunshots from inside the classrooms. But no officers move in. After more than 50 minutes a team moves up the hallway. Moments later, behind them an officer calmly walks over to a hand sanitizing station—and cleans his hands. Officers still haven’t breached the classroom. Finally at 12:50 officers move in and there is more rapid gunfire. The gunman is dead. This is an edited excerpt of the surveillance video. Families of the victims will see the entire 77-minute video on Sunday.   The chairman of the Special House Committee says the public will see it soon after. This comes after weeks of calls from public officials, the families of the victims, and the Uvalde community as a whole for more transparency to make evidence public. "Everyone has a right to make sure everyone knows 100% of the facts. I'm on the side of full disclosure of all that information," said Governor Greg Abbott.