Violence In PG-13 Films: Does Scientists' Critique Of MPAA Get It Right? 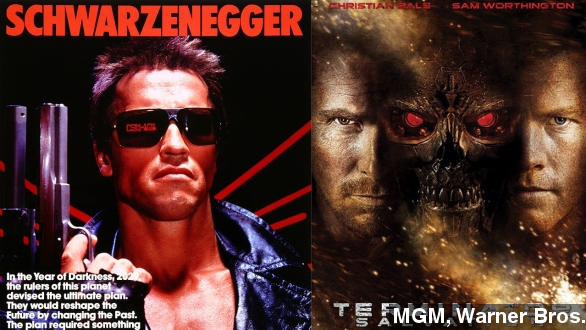 A new study's authors say gun violence in PG-13 films now rivals R-rated films, but their claims about the dangers of violent media might be on shaky ground.

If you’re a parent picking a movie for your youngsters, the Motion Picture Association of America’s ratings are probably your go-to guide on what to expect.

You can be sure, for instance, that a PG-13 movie won’t contain more than one F-word, more than a flash of nudity, or any of either if it’s sexual. In fact, you can be reasonably sure there won’t be sex. (Via Motion Picture Association of America)

But when it comes to violence, well, you might not know what to expect. A new study in the journal Pediatrics says violence in PG-13 movies has been climbing steadily for decades.

The study looks at violence in top-grossing films from 1950 to 2012 and gun violence specifically from 1985, when the MPAA adopted the PG-13 rating. Overall, they found violence in movies has doubled since 1950. (Via MGM / ‘The Terminator’, Warner Bros. / ‘Terminator Salvation’)

Not much of a surprise there. But they also found gun violence in particular tripled since 1985, and all of the change came from one ratings bracket: PG-13.

The news that PG-13 movies have become more violent than R-rated films in the past few years got quite a bit of buzz in the media — and it didn’t hurt that the scientists themselves linked the data to a hot-button issue. (Via NPR, Los Angeles Times)

The Guardian quotes one of the study’s authors saying: “It’s disturbing that PG-13 movies are filled with so much gun violence … We know that movies teach children how adults behave, and they make gun use appear exciting and attractive.”

And the other author made similar claims about violent media to The Wall Street Journal.

“One effect is that it can make kids more aggressive. Another effect is it can make them numb to the pain and suffering of others. Both effects are not desirable.”

They say by letting violence slide in PG-13 films, the MPAA is dropping the ball. But their claims about the effects of violent media are more controversial than the study might lead you to believe.

A psychologist writing for The Huffington Post says: “Speaking as a researcher in the field, the evidence linking violent media to even mild acts of aggression is inconsistent. Evidence for a causal effect, even in part, on serious societal violence is generally lacking.”

Another researcher tells The Washington Post the new study’s numbers look solid, but: “The more important question is whether repeated exposure to media violence increases violent behavior in the long run. This is a difficult question to answer, and not one that I’ve seen a convincing answer to.”

It’s worth pointing out that violence in the U.S. has been decreasing for two decades, though it has begun to tick upward over the past two years. (Via MetroTrends)

But even if claims about the effects of violent media are on shaky ground, the new study still makes a good point: the PG-13 rating isn’t particularly useful for parents who find violence as objectionable as sex or language.

Of course, the researchers aren’t the first to make that point. Late film critic Roger Ebert hammered the MPAA many times over what he called “bean counting” — adding up the number of curse words or seconds of nudity instead of “taking into account the context and tone of a movie.” (Via RogerEbert.com, The Wall Street Journal)

But a former president of the group told CNN it’s not the MPAA’s fault. It’s America’s.

“This is a cultural thing in America. … The truth of the matter is that ratings reflect our culture. Our culture historically has been much more concerned about sexual context, about nudity, than it has been about violence.”

There are alternative ratings systems out there, and the MPAA system is voluntary — but it’s also deeply entrenched in studio and theater policies. So for now, the best system for parents is to do their own homework.