Violent Clashes Break Out At Several Protests Across U.S. 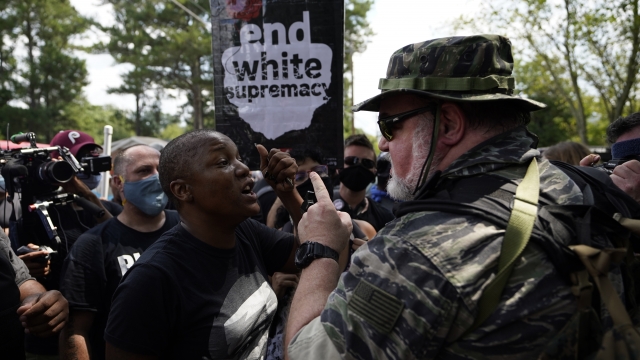 Armed far-right protesters tangled with counter-demonstrators in Kalamazoo and in suburban Atlanta.

The U.S. saw another weekend of violent protests, with clashes breaking out in several cities.

In Kalamazoo, Michigan, a far-right group called the Proud Boys rallied, with many demonstrators visibly armed and some waving Confederate battle flags. They are considered a hate group by the Southern Poverty Law Center. As demonstrators marched downtown, they clashed with counter-protesters. Police quickly moved in and dispersed the crowds, and a number of arrests were made.

A similar situation happened in Stone Mountain, Georgia — a majority-Black Atlanta suburb with a large Confederate monument. Right-wing demonstrators, some with Confederate battle flags and military gear, also clashed with counter-protesters there. Many in the opposing group supported the Black Lives Matter movement with signs and shirts.

Meanwhile, in Chicago, a march against police brutality began peacefully but authorities said it was "hijacked" by "agitators" who assaulted officers with large black umbrellas. Authorities say protesters also used pepper spay on police and that officers responded "proportionately," arresting at least 24 people. The department reports two protesters and 17 officers were treated for injuries. One of the protest groups say police beat and detained two of their organizers.