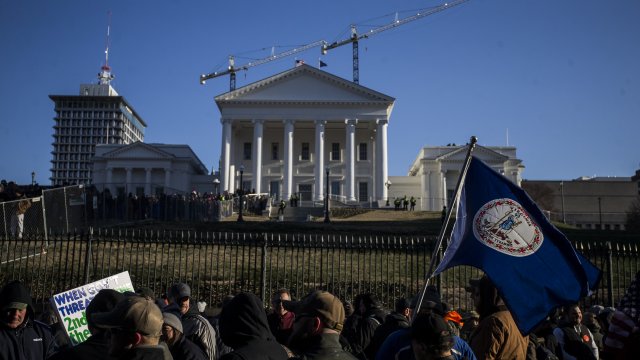 The vote to pass SB240 came down along party lines, with a Democratic majority. The bill now heads to the state House of Delegates.

Virginia's state Senate advanced a red flag gun bill. The vote came down along party lines, with a democratic majority. The bill is now headed to the state House of Delegates.

A spokesperson for Virginia's House speaker said the chamber "will deliver" on the bill.

Red flag laws allow law enforcement to take firearms from a person deemed a danger to themselves or others after a judge examines proof of that claim.

73% of Virginians support the red flag bill, SB240, according to a Christopher Newport University poll.

But it's advancement through the now-Democrat led legislature doesn't sit well with Virginians who oppose the bill.

The senate vote in support of the bill comes days after an estimated 22,000 gun owners gathered at the state's Capitol to protest against it and a handful of other gun control bills.

"The governor is the one driving this, not us. If he wouldn't be pushing gun control like he is on everyday people, this whole thing would die down. But he's insistent on all these gun control bills that don't affect criminals, but affect people like me," Philip Van Cleave, president of Virginia Citizens Defense League, said.

The red flag gun bill joins other gun control measures including background checks for private firearm transfers and a proposal to limit gun purchases to one firearm a month.