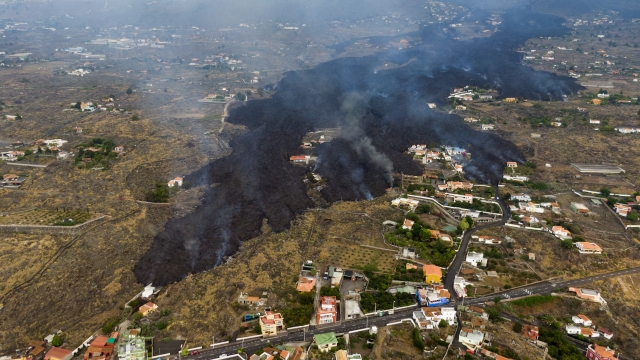 The volcano began erupting Sunday on the island of La Palma after thousands of nearby earthquakes were recorded.

As a new volcanic vent blew open and unstoppable rivers of molten rock flowed toward the sea, authorities on a Spanish island warned Tuesday that more dangers lie ahead for residents, including earthquakes, lava flows, toxic gases, volcanic ash and acid rain.

Several small earthquakes shook the island of La Palma in the Atlantic Ocean off northwest Africa on Tuesday, keeping nerves on edge after a volcanic eruption on Sunday. The island, with a population of 85,000, is part of the Canary Islands archipelago, a key tourist destination for Europeans.

Authorities said the new fissure demonstrated that the area was unstable and unsafe, and kept people at least 1.25 miles away.

World Leaders Try To Hammer Out Next Steps On Climate Change

The rivers of lava, up to nearly 20 feet high, rolled down hillsides, burning and crushing everything in their path, as they gradually closed in on the island's more densely populated coast. One was bearing down on Todoque, where more than 1,000 people live, and where emergency services were preparing evacuations.

So far, the eruption has destroyed around 190 houses and forced the evacuation of 6,000 people.

The lava's advance has slowed to about 400 feet an hour, according to officials, and wasn't expected to reach the Atlantic Ocean before Wednesday. Scientists say the lava flows could last for weeks or months.