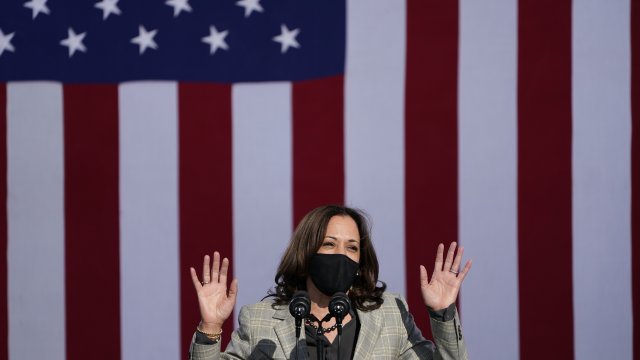 Kamala Harris' time as a prosecutor — first for San Francisco then for all of California — is a mixed bag of progressive and tough-on-crime policies.

Kamala Harris' time as a prosecutor, first for San Francisco then for the entire state of California, is full of contradictions. From her stance on the death penalty, to her views on mass incarceration to how to address police-involved shootings.

Harris was the first Black woman to be elected district attorney in California's history — one of many firsts. She campaigned on being progressive, competent, and promised to raise the conviction rate in her district. And she did.

During Harris' first three years in office, San Francisco’s conviction rate rose from 52 to 67 percent. She pushed for jail time rather than probation for crimes like robbery and home burglary.

One of her most controversial “tough-on-crime” decisions came in the form of an anti-truancy policy.

HARRIS: "I believe a child going without an education is tantamount to a crime so I was going to start prosecuting parents for truancy. Well, this was a little controversial in San Francisco," Harris said in a speech to Commonwealth Club of California as District Attorney Kamala Harris in 2010.

Harris' office spearheaded an effort to criminally prosecute parents whose children repeatedly skipped school. The program led to a 33 percent increase in student attendance during her tenure and the prosecution of just 25 cases — though none of those parents saw any jail time.

FAVREAU: "So what went wrong with that versus what you did as DA?" Jon Favreau asked Harris on "Pod Save America." HARRIS: "Unintended consequences to be frank. When I was DA we never sent a parent to jail. … In some jurisdictions, DAs have criminalized the parents and I regret that that has happened," Harris responded.

On the other hand, Harris created a criminal justice program that was well ahead of its time.

The Back on Track program cleared the record of first time low-level drug offenders by enrolling them in a year-long diversion program. While the program successfully served a relatively small number of people — about 300 in eight years — it did drastically cut the recidivism rate of its graduates.

Less than 10% of Back on Track graduates returned to prison or jail within two years of release compared to 53% of those who didn't complete the program.

Harris’ commitment to opposing the death penalty was challenged very early in her career when a police officer was killed by a gang member in her district. She did not seek the death penalty despite pressure from local and state officials.

But later, as Attorney General, she appealed a federal judge’s decision that California's death penalty was unconstitutional. She said while she was against capital punishment, she felt her position required her to defend state laws.

This balancing act in Harris' career continued during her time as Attorney General.

In reaction to the high-profile police killings of Michael Brown, Laquan McDonald, Eric Garner, Tamir Rice and others in 2014 Harris launched an implicit bias training for California law enforcement while backing a DOJ investigation of San Francisco PD.

But critics say she didn't do nearly enough to intervene in police-involved killings throughout the state.

But what may be the biggest change from her time as a prosecutor to now is public opinion.

The percentage of Americans who say the justice system is "not tough enough" shrank from 70% in 2000 to 45% in 2016 — among Democrats that number is even lower.

So despite the barrage of criticism Harris has received about her time as a prosecutor, in many cases her policies were not out of place for the time she served. Jamal Andress, Newsy, Chicago.