Making Gun Customers Wait To Get A Firearm Might Prevent Deaths 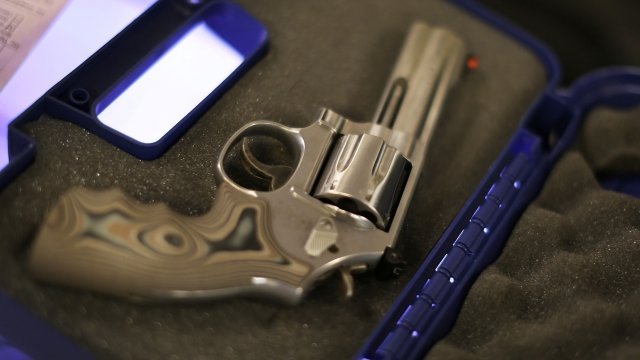 A recent study examined the states and Washington, D.C., that it says had waiting periods in 2014.

Wait times might help reduce handgun deaths, according to a recent study.

Wait times mean customers can't pick up a firearm the same day they buy it.

From 1970 to 2014, various states and Washington, D.C., have had a version of wait time laws. Background checks have replaced wait times in some states.

The study looked at 17 states, and Washington, D.C., that it says had waiting periods in 2014. The researchers also considered how social factors like poverty rates and urbanization affected gun violence.

The study found every year, 750 fewer homicides happen in those states because of wait times. If the same laws were used in every state, researchers say it would stop another 910 homicides.

The researchers noted that a wait time law "doesn't restrict anybody's right to own a gun."

In some states, the wait period was only for handguns, which means a customer could still get a shotgun or another type of gun the same day of purchase.

The study also found with a waiting period, a person didn't go straight to another method of violence, though it's unclear if the wait time stopped the crime completely or just temporarily dissuaded a person.

Correction: A previous version of this story left out that the majority of firearm-related deaths in 2013 were suicides.