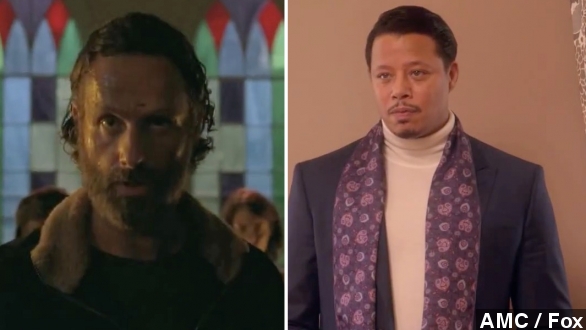 "Empire" has posted the most consecutive ratings gains ever and "The Walking Dead" continues to be a giant but the similarities end there.

TV’s two highest-rated dramas could not be more different.

AMC’s “The Walking Dead” is the well-known ratings champ. The zombie drama continues to rank the highest in the 18-49 age demographic.

But Fox’s hip-hop drama “Empire” is coming for the top spot. That show’s last episode came in second for the week in the 18-49 demographic and raked in an impressive 12.9 million viewers overall.

That’s a growth of 6 percent from last week, meaning "Empire" has now posted more consecutive ratings gains than any show ever.

“Empire” is still in its first season and it’s pretty typical for a series premiere to get stellar ratings thanks to a marketing push, but usually they began to taper off and level out after the first few episodes.

So whether Fox will be able to maintain this success is anyone’s guess and while “Empire” and “The Walking Dead” may be topping the charts, they don’t exactly provide a formula for good ratings.

On one hand you have an hour of zombie-killing and another you have a family drama centered around the music industry. There isn’t exactly a common element to pull out of the two.

AMC’s mega-hit has had four and a half seasons to build up an audience and it came out of the gate with a pretty big support base, thanks to fans of the comic series. "Empire" is just seven episodes into its first season, and already breaking ratings records.

Despite those differences, "The Walking Dead" and "Empire" are both pulling in massive audiences at a time when viewers are flocking to online services like Netflix and good ratings for broadcast TV have been hard to come by.

This video contains an images from Getty Images.