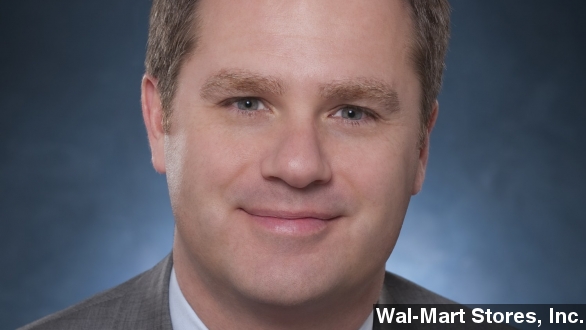 The 47-year-old will take over for outgoing CEO Mike Duke beginning in February.

But now, McMillon is gearing up to take the helm of the retail giant's highest position as CEO. A writer for Forbes calls the decision a "surprise move" because there weren't really any obvious candidates rumored to be in the running for the top spot.

In a news release published on its website Monday, Wal-Mart founder Sam Walton said: "A merchant at heart, Doug has both a long history with our company and a keen sense of where our customers globally are heading next." (Via Wal-Mart Stores, Inc.)

McMillon will replace 63-year-old CEO Mike Duke in 2014. With his retirement right around the corner, NerdWallet did a survey showing just how high retirement plans compare between CEOs and average employees. (Via YouTube / Atlantic Creative)

The results might surprise you. The survey shows Duke's pension of more than $100 million is more than 6,000 times higher than that of the average Wal-Mart employee. The next closest company is health care giant McKesson with the chief executive's 401k more than 900 times that of its employees. (Via NerdWallet)

Duke will retire after spending nearly five years as the company's chief executive. He took over at the height of the global financial crisis and has been with Wal-Mart since 1995. Before taking over as CEO, Duke was the company's vice chairman. (Via YouTube / corporatereports)

Wal-Mart's news release quoted McMillon saying his upcoming promotion at the company is a "great privilege." McMillon is expected to start his new role as Wal-Mart's CEO Feb. 1.