Was Beirut Bombing A Message From Hezbollah? 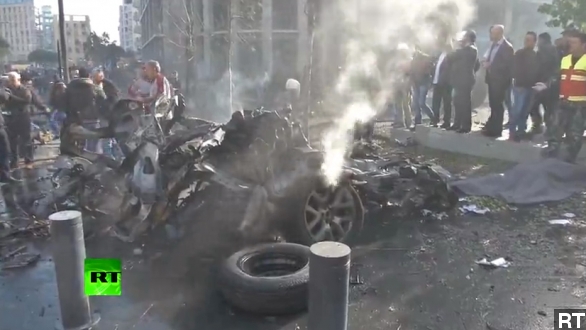 A car bomb in Lebanon's capital killed a pro-Western official and is being widely interpreted as a message to his opposition coalition.

A huge car bomb in Lebanon's capital Friday is especially important to watch for its possible connection to neighboring Syria.

(3 seconds NATS) The blast hit close to government headquarters in Beirut, and killed former ambassador to the U.S. Mohammed Chatah. (NATS) (Via RT)

Press TV's correspondent says some suggest Syria could be behind the attack. That's because Chatah — a Sunni — opposed embattled Syrian President Bashar al-Assad. His allies are blaming Shi'ite Hezbollah.

Al Jazeera adds another dimension — that Chatah was particularly close to former prime minister Saad al-Hariri, whose father Rafik was killed in a 2005 bombing.

And the start of the trial of five Hezbollah suspects in that bombing is coming up in January. Chatah was pretty vocal in his criticism of Hezbollah.

But here's the thing: the BBC's correspondent in Beirut says Chatah was a moderate, and wasn't himself a very controversial figure.

She's essentially suggesting whatever group was behind the attack was actually trying to send a bigger message to the anti-Hezbollah opposition bloc known as March 14 Alliance — of which Chatah was a part.

​Lebanon as a country is really still recovering from a 15-year-long civil war. Violence between Sunni and Shi'ite Muslims has seen an increase in recent months. (Via WABC)