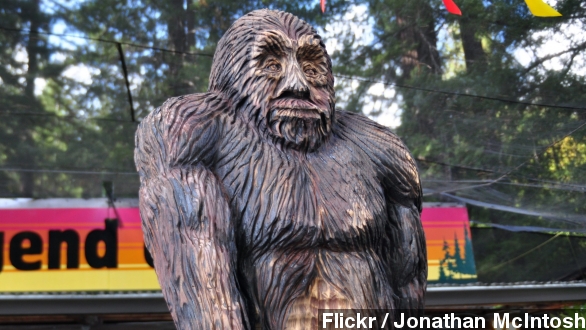 A DNA analysis of supposed Bigfoot hairs collected over 50 years doesn't support the existence of a yeti.

Stories of the Yeti have long been the stuff of fiction, but now Bigfoot is taking a big step into the scientific community and it's not looking good for believers. (Flickr / Jonathan McIntosh)

Professor Bryan Sykes, a geneticist at Oxford, analyzed the DNA of supposed Bigfoot hair samples collected over the last 50 years and found that for the most part it came from dogs, cows and other mundane non-Yeti animals. (Via Big Think, Flickr / Stephen Mackenzie)

"Like most people, I've always been curious about what these really are. It's highly unlikely that we will find an entirely new species, but we might." (Via NBC)

And Time reports that the professor's investigation did turn up a potentially new species of bear, in samples collected from India and Bhutan.

But, as ever in science, and science fiction, skepticism reigns supreme and even that mystery bear claim is being questioned.

A columnist for The Guardian did some digging and turned up that there could be a scientific explanation for the unrecognized DNA writing, "polar bears hybridised with brown bears long ago in the late Pleistocene so that may be the reason for Sykes and colleagues' genetic findings." ​

So could the DNA evidence point to a previously unknown population of brown bears in central Asia? Could the legend come from a group of polar bears living in the Himalayas?  (Via Flickr / Eric Gorski, Flickr / Nathan Rubert)

For all you  Mulders out there, if you want to believe, Professor Sykes told NBC, "I don't think this finishes the Bigfoot myth at all. What it does do is show that there is a way for Bigfoot enthusiasts to go back out into the forest and get the real thing."

And remember: the absence of evidence is not the evidence of absence.