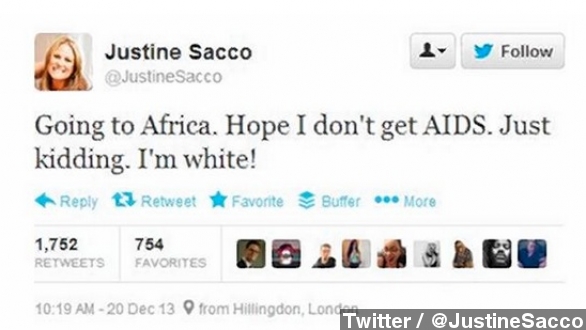 While unplugged and unaware on an international flight, a PR exec faced global backlash for an offensive tweet.

Twitter was not in its finest form late Friday evening, as a PR executive's offensive tweet prompted ugly backlash across the social network, all while she was unplugged and unaware aboard an international flight.

Justine Sacco is the communications director for InterActivCorp, the parent company of Match.com, CollegeHumor, Vimeo and others. Friday, before a long flight from London to South Africa, an ill-advised tweet was posted to her account. (Via New York Daily News)

Sacco only carried less than 200 followers when she sent the tweet, but it spread like wildfire. Her unprotected social media accounts revealed other candid posts that made the idea of a Twitter hacking seem unlikely — those included slights against the British and a post about tweeting while intoxicated. (Via News.com.au)

A sampling of the criticism shows accusations of racism against Sacco and an acknowledgment that the collapse of a person's public image while she was totally unaware was indeed somewhat odd. (Via Twitter)

#HasJustineLandedYet occupied the top Twitter trending topic worldwide for part of the night. It was still in the three spot by Saturday morning.

Confirming the belief Sacco was indeed off the grid while en route to Africa was a statement from her company. IAC told The Wrap: "This is an outrageous, offensive comment that does not reflect the views and values of IAC. Unfortunately, the employee in question is unreachable on an international flight, but this is a very serious matter and we are taking appropriate action."

Saturday afternoon, IAC said it had parted ways with Sacco but that it hoped people would forgive a very poor decision from an otherwise decent person.

No one disputed her tweet was offensive, but the backlash against her also proved controversial and prompted a question: Did all this scrutiny of a non-public figure constitute cyberbullying?

According to Merriam-Webster's admittedly broad definition, it's "the electronic posting of mean-spirited messages about a person often done anonymously." This circumstance seems to fit the bill.

A writer for Mashable says when critics started leaving hateful messages on Sacco's Instagram page, including on photos of her kids, it had all gone too far.

"There's a fine line between slamming Sacco for her blatant what-guys-I-was-just-kidding buffoonery, and taking an unconscionable delight in the misfortune of others."

Perhaps the only winner in all this was the enterprising soul who registered the domain name justinesacco.com and re-routed it to the charitable Aid for Africa's donation page. Well played.