Was The Biggest Climate March In History Underreported? 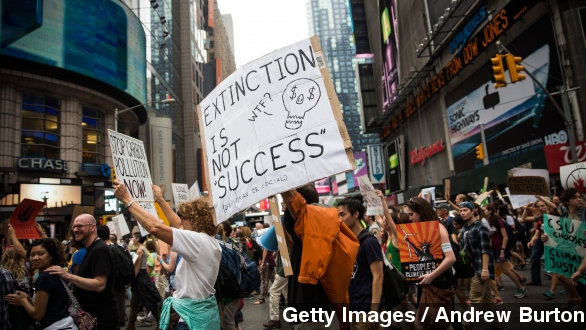 The People's Climate March in New York City drew more than 300,000 people, possibly a record-breaking number. Was the march underreported?

By the end of the day Sunday, the People's Climate March in New York City had drawn more than 300,000 people — but you might not have known it from watching the news.

The possibly record-setting rally didn't make it into any of the Sunday morning talk shows — cable or network — which instead opted to cover popular topics like ISIS and upcoming elections. (Video via People's Climate March)

The march stretched from Times Square up through Columbus Circle and to the American Museum of Natural History, shutting down traffic — the focus of some local coverage.

WCBS: "The size of the march creating almost apocalyptic traffic conditions across Manhattan: Central Park West, shut down. Some of Columbus Avenue, 59th Street ... stalling drivers for hours in their cars."

That makes it sound a little more like a natural disaster than a protest, but even the massive scale of the march was dwarfed by some celebrity cameos when it came to media coverage.

The presence of Leonardo DiCaprio, Sting and Mark Ruffalo, among others, grabbed the headlines of tabloids including the New York Daily News and the Daily Mail while other outlets focused on more political celebrities such as United Nations Secretary-General Ban Ki Moon and former Vice President Al Gore, with the former grabbing headlines in Bloomberg and the BBC. (Video via United Nations)

Despite the march not getting the attention you might think a 300,000-person march in a major U.S. city would get, as CNN's Brian Stelter tweeted, the march started after the Sunday morning shows, and Sunday night coverage was a little more extensive.

PBS: "On this edition for Sunday, Sept. 21, hundreds of thousands turn out in New York City and around the world to demand action to halt climate change."

"PBS NewsHour" led with the story, and "NBC Nightly News" devoted a couple minutes to a segment on it, and ABC's "World News Tonight" gave it less than a minute.

A writer for The Huffington Post argues the lack of coverage — of the biggest climate march in history — shouldn't be surprising because "the topic of climate change [is] something that usually gets either ignored or badly handled."

And the whole time there's been skepticism over the effectiveness of the march.

TOM KEENE FOR BLOOMBERG: "How naive is that event we saw yesterday?"

PAUL BARRETT: "Well, protests are designed to be naive. ... They're designed to marshal popular opinion, even if that opinion is relatively crude."

The march came two days before the U.N. Climate Summit was set to start in New York.