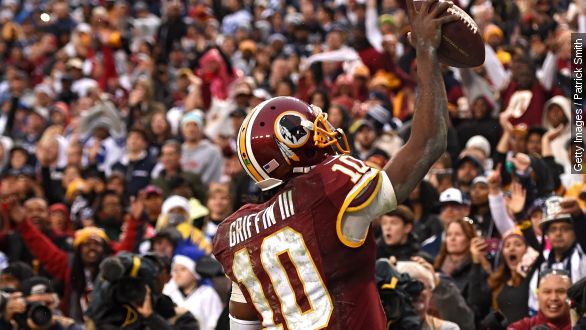 The team's general manager said Monday it will use the fifth-year option on Griffin's $16 million contract, which is guaranteed against injury.

The fall from grace has been rough for former NFL rookie of the year and Heisman Trophy winner Robert Griffin III, but despite RGIII's rough two seasons, Washington Redskins General Manager Scot McCloughan has issued a vote of confidence for the injury-prone quarterback.

McCloughan announced Monday Washington will be exercising its fifth-year option on Griffin's contract, which is worth $16 million and is guaranteed against injury, meaning Washington can't cut Griffin if an injury from this season affects him playing in 2016.

The contract does not, however, protect Griffin if he plays lousy. Washington can cut Griffin, and his $16 million paycheck, any time before the 2016 league year begins. The 2015 league year began March 10. (Video via ESPN)

McCloughan made it very clear that RGIII's option has no impact on Washington's fifth pick in this year's draft, saying it "does not affect our draft process whatsoever" and that Washington will take the best player available at No. 5.

Griffin couldn't have had a better rookie year. He lead Washington to its first NFC East title since 1999. He was selected for the Pro Bowl and broke the NFL rookie record for passer rating. Unfortunately, he finished his all-pro run in the 2012 season with a torn ACL.

"Due to our struggles offensively, I thought I'd try a different quarterback at the helm," said head coach Jay Gruden.

In the two seasons since his big injury, Griffin is 5-15 in games he played in, he's thrown 18 interceptions and last year, Griffin finished the season with one of the lowest quarterback ratings in the league. (Video via WJLA)

Since Griffin's subpar play last year, there has been a lot of talk about what his future would be, but this announcement from Washington seems to back up head coach Jay Gruden's claim that it will be sticking with Griffin.