Water Levels In Venice Are At Record Lows 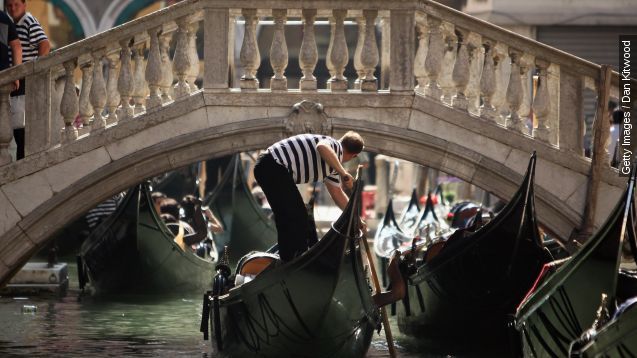 Gondolas and water taxis are having a tough time getting around smaller canals because the water level in Venice is so low.

Water levels in Venice are at their lowest point ever since records began. Canals are measuring about 28 inches below the seasonal average and daily transportation on water taxis and gondolas is becoming difficult. (Video via NBC)

This is an unusual problem for "The Floating City." What's much more common this time of year is "acqua alta" or high water. High tides that cause flooding in major portions of the city usually occur multiple times a year.

But 2016 looks like it will be off to a dry start in Venice. A local newspaper says a combination of abnormal tides and a dry season have resulted in the low water levels. (Video via Televenezia)

Low waters along the Grand Canal are revealing poor maintenance on the city's waterways. The lack of upkeep along the canals might have something to do with a multibillion-dollar construction project to build gates to protect the city from floods.

According to CNN, that project is already a decade behind schedule and way over budget, so it's no huge surprise the upkeep of canals has fallen by the wayside. (Video via MOSE)

And yet, with more than 20 million tourists visiting the city each year, we're thinking it's vital for the city to have some pretty canals to show off. Finding that perfect level of keeping the waters not too high and not too low, however, is beyond us.