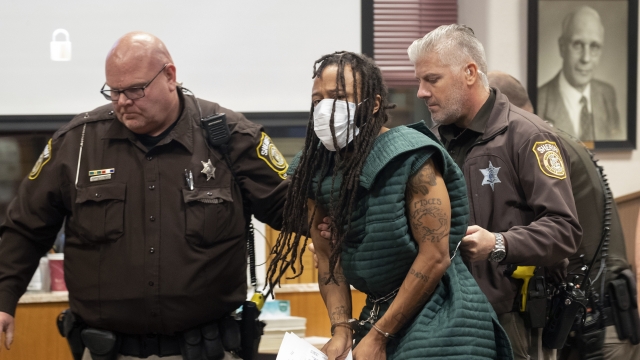 Dozens of new charges have been filed against Darrell Brooks, the man accused of plowing his SUV through a Christmas parade in Waukesha, Wisconsin.

The 39-year-old reportedly killed six people while fleeing a domestic violence scene in the town in November.

He now faces 71 new charges — according to the 32-page amended complaint filed in Waukesha County court Wednesday — for the injuries prosecutors say he caused on the parade route and two counts of misdemeanor battery and domestic abuse that police say happened at Frame Park minutes before the deadly attack.

Documents say when police met with Brooks' girlfriend back on the night of the parade, she had a swollen and bruised eye and her leg was in a boot. She says the two had gotten in an argument in Brooks' red Ford Escape SUV.

During that argument he drove around nearby streets and documents say "...She became fearful of his driving because he was driving fast and was only driving with one hand and was striking her in the face with his other hand."

Police say the woman lied about the encounter at first because she was afraid of Brooks saying that he "…has caused substantial injury to her in the past and has run her over with his vehicle." The woman says that's why her leg was in a boot — because he had run her over with the same SUV and broke her leg. The woman eventually got out of the SUV and walked back to Frame Park where she says Brooks came back. Police say surveillance video in the area shows after another altercation with the woman and her friends, he "got into his SUV and began to drive off in a southwesterly direction towards Main Street." That's where Brooks entered the Christmas parade route where hundreds of parade participants and thousands of spectators were enjoying a Waukesha holiday tradition.

One officer says he "stepped in front of the Ford Escape and pounded on the hood of the vehicle and yelled multiple times 'stop'" but Brooks continued down the route, they say, for a third of a mile — or five blocks — hitting dozens of people from eight different parade groups and killing six.

One witness told police, "It was like the SUV was trying to avoid vehicles, not people. There was no attempt made by the vehicle to stop, much less slow down."

One officer said "At one point, Brooks leaned his head out the window to steer because there was a person on the windshield blocking his vision."

It wasn't until an officer fired at the SUV that it left the route and was later found abandoned — shortly before Brooks was taken into custody.