Winter Weather Causing Hundreds Of Flights To Be Canceled Or Delayed 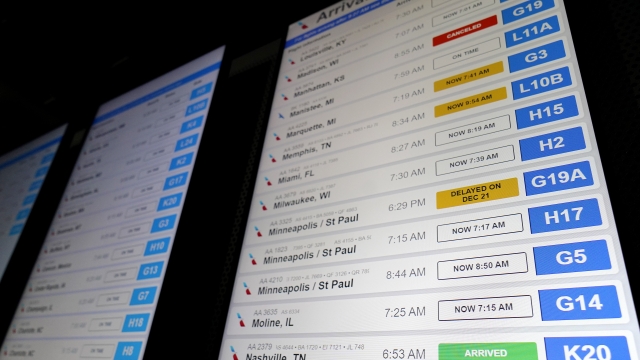 It’s not the present you’d want this holiday season: A bomb cyclone bringing a quickly intensifying storm with snow squalls and blizzard conditions to many parts of the U.S. The weather is creating a travel nightmare, especially for people looking to make it home for the holidays.

"It's pretty frustrating, but what can you do?" said Joshua Pankewich, who's traveling to Edmonton, Canada.

He is hoping for a Christmas miracle after his flight to Edmonton was canceled. Forecasters predict heavy snow and flash freezing that will lead to icy areas on the roads, from the plains all the way to the east coast today into Saturday. The National Weather Service reported 190 million people are under winter weather advisories.

Airlines are taking note — canceling, delaying and changing flights. Some travelers doing whatever they can to get to their final destination.

"We can't get into either Santa Barbara or LAX. So we finally were able to rebook into San Jose and then we'll drive four hours," said Leah and Ian Evison, who are traveling.

Southwest Airlines said it’s already canceled at least 500 of its 4,000 scheduled flights on Thursday and Friday. The airline, along with others like Delta and American, are waiving change fees to allow people to choose new flights to avoid the weather.

"We were supposed to come back Christmas Eve and we moved our flight just so we didn’t have to travel the day off because of all the snow coming in we’re going to be delayed," said Kenci Grayson, a traveler.

But it’s not just air travel. Amtrak canceled train services from Nebraska to New York through Christmas. Greyhound has canceled scheduled routes across the Midwest into Friday.

Weather experts warn as the winter storm intensifies that it may be extremely dangerous to impossible to travel on roadways. You can expect some road closures.

How To Protect Your Pets During Extreme Cold

Here are some tips to keep pets and other animals safe amid record-breaking cold temperatures.