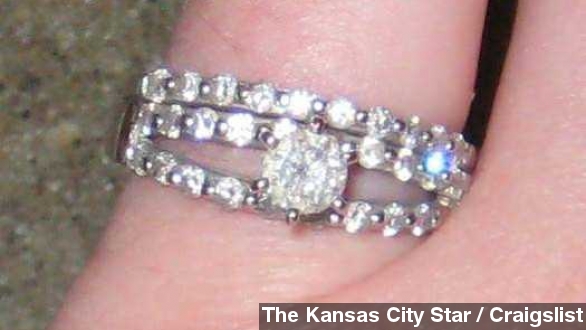 A Kansas City woman looking to trade her old wedding ring for football tickets struck a deal with a guy willing to do the exact opposite.

A Kansas City man got just the tool he needed to propose to his girlfriend thanks to a woman who was more than willing to give up her wedding ring.

This circle-of-love story begins with an unnamed woman looking to trade her wedding ring for tickets to the Dec. 1 Kansas City Chiefs and Denver Broncos game. (Via KSHB)

The woman, dubbed Wedding Ring Lady by the press, was having some trouble finding game tickets for her husband's 40th birthday.

So, she took to Craigslist to get her barter on. Sounds normal enough.

According to The Denver Post, the woman's diamond-on-white-gold-on-diamond wedding ring — appraised at nearly $3,000 — was from a previous marriage. She said in an e-mail the ring "holds no value to me and is a lot easier to part with over tickets than handing that much cash over for the tickets."

Enter Rusty Jones, a man who had been talking engagement with his girlfriend and looking for a ring to make it official. When Jones saw Wedding Ring Lady's ad, he knew he had to move on the opportunity. (Via WDAF)

But the two parties almost fumbled the handoff. Jones had lower-level seats, but Ring Lady wanted club-level seats. The ad was taken down and Jones thought it was game over, until Ring Lady reposted the ad.

The two got back in contact and later met up to get the jewelry appraised. Ring Lady said in an e-mail, "The official trade was the ring for 4 tickets to the 12/1 Broncos game and 2 tickets to the 11/24 Chargers game." (Via The Kansas City Star)

The trade was done but there was still the matter of Jones popping the question to his boo. How'd he keep it a secret with all this publicity?

Well, he didn't. Jones told ABC the element of surprise had been blown, especially after the local paper ran the story. Thanks, journalists.

Jones said he and his girlfriend instead chose to spend a low-key night at home, where he finally asked her to marry him. The end.