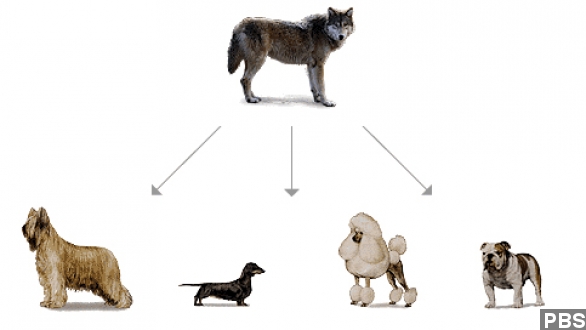 A study placing the birthplace of the domestic pooch in Europe is the latest blow in a surprisingly contentious debate.

We know dogs evolved from wolves, but it turns out how and when the transformation took place is actually a little bit of a controversy, believe it or not.

A new study in the journal Science makes the claim our canine friends were domesticated sometime between 19,000 and 32,000 years ago in Europe. And the researchers are making no bones about their findings.

One of the study's authors told The New York Times, "It's a simple story, and the story is they were domesticated in Europe."

That's a pretty bold claim, because in just the past 10 years, studies have pinned the origin of domestic dogs to several other places around the globe, including the Middle East and East Asia.

The scientists' confidence comes from the fact they have the first ancient DNA evidence to bring to the debate. The researchers compared genes from modern wolves and dogs to ancient ones and found modern dogs were most closely related to ancient European wolves. (Via BBC)

That was a bit of a shock for study author Robert Wayne of UCLA, who back in 2010 was firmly in another camp.

Wayne says his about-face on the subject comes from recognizing that dogs and wolves kept interbreeding over the millennia, making the genetics tricky. He says his earlier work didn't take that fact into account, and — here's where the controversy comes in — neither did the work of Peter Savolainen, another big name in the field, who for years has pushed the idea modern pooches came from China around 15,000 years ago. (Via Royal Institute of Technology)

"There seemed to be just a single geographic origin of dogs and that this origin is somewhere in East Asia." (Via PBS)

Savolainen took issue with the new study, saying it unfairly ruled out Asia by not picking the right specimens. ​"It’s not a correct scientific study, because it’s geographically biased ... What they need to have is samples from south China." (Via The New York Times)

Wayne and the others addressed the criticism, saying that kind of study might be impossible because the bones just aren't there. "In fact, no ancient dog remains older than 13,000 years are known from these regions." (Via NBC)

Who would have thought dog evolution would be such a hot-button issue with scientists? And a geneticist who's not in either camp told Science since genetics is so messy, the debate could go on for a long time.

"Genomic archaeology has its limitations, and the dogs are testing it. ... It may settle one day, but don't count on it."