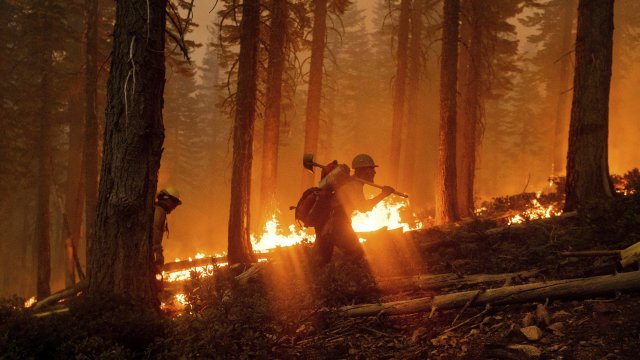 Smoke from wildfires burning in Washington, Oregon and California is now moving to other parts of the globe.

Lauren Magarino: "Katherine — we've been talking about smoke and air quality for a couple of days now. Has the air quality in these states improved at all?"

Katherine Biek: "There's been no break in the air pollution stemming from the fires so far, Lauren. But officials are hopeful that some rain in the forecast in both Oregon and Washington will start to clear the air. But we're actually starting to see some of that wildfire smoke moving across the country. Residents are seeing similar hazy skies in the Midwest, in New York City and even all the way over in Europe — that's more than 5,000 miles away. Scientists with the European Commission said smoke was actually seen in the U.K. and other parts of the continent earlier this week, and they expect to see similar smoke this coming weekend. Now smoke usually travels once or twice a year from North America to Europe, but it rarely occurs from fires burning in the U.S. Instead, it's usually coming from blazes burning in the British Columbia region, Lauren."

Magarino: "We talk a lot about how residents have been affected by these fires, but what about the animals in these states?"

Biek: "The fires are having a really dire effect on wildlife. We're seeing populations of some endangered species almost wiped out entirely. For example, pygmy rabbits in Washington state officials say there's now only about 50 of these animals left because of the fires. And as much as 70% of the endangered sage grouse and sharp tailed grouse populations have been killed in the state too. And the birds that have managed to survive now don't have a safe habitat to live in because the wildfires have burned it all the way. And we're seeing similar destruction in habitats, uh, inhabited by the northern spotted owls in Oregon. That species is also considered threatened, Lauren."

Magarino: "Now there are also crops. I mean its residents. It's animals, and also crops are grown in this region. So do farmers expect the fires will hurt any production?"

Biek: "Yes, they are expecting to see a lower yield of crops this season. Fires have burned tens of thousands of acres in California wine country. Strawberries also growing in that region have been hurt by the high temperatures. But in Washington, growers now say apple crops are at risk. The state is actually the top apple producer. It's responsible for supplying about 65% of all apples grown in the U. S. And 95% of the apples we export. The Washington Apple Commission previously estimated that about 134 million boxes each totaling 40 pounds would be harvested in the state this year. But now, because of the fires, the commission says, the apple crop will be as much as 10% smaller than it previously predicted, Lauren."

Magarino: "These fires clearly causing wide reaching and far reaching effects on many, many matters for all of us. Newsy is Katherine Biek. Thank you."