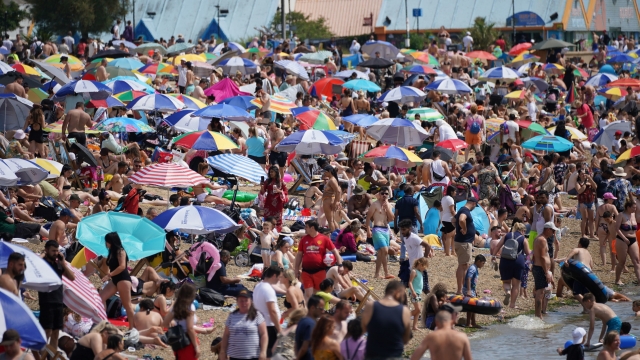 Temperatures are hitting triple digits in western states all the way from Vegas to Oklahoma, and San Antonio to Montana.

Temperatures hit triple digits — 100 degrees, from Vegas to Oklahoma City, and San Antonio all the way to Billings, Montana.

"People will dehydrate a lot faster than they every think," said Stacy Chronister, a medical school professor.

Doctors are warning about health hazards.

"That moment when you feel like you're kind of moving through mud a little bit, and really dragging, that's a big sign," Chronister said.

Programs in places like Tucson are trying to keep the unhoused cool.

Michael Colianni is a firefighter at Tucson Fire Department.

"Not everyone has the luxury that others do when it comes to air conditioning, being able to stay indoors and work indoors," Colianni said.

The latest wave is part of a brutal summer.

It's already testing the endurance of livestock and crops.

"With the heat, they're constantly in the shade," said Jordan Eidson, a Wagoner County, Oklahoma rancher.

"Not only have we suffered from just drought or lack of rain, but the heat has intensified all that for us," said George McDonald, a Tennessee farm owner.

"Check your vehicle before you leave, make sure you know whats going on in your car before you hit the road," said Justin Hopkins, with the Nevada Department of Transportation.

Across the pond, a brutal heat wave stopped flights at a London-area airport after part of the runway started to melt.

The city is forecasted to hit north of 100 degrees Tuesday.

It could be the hottest temp ever recorded in Britain.

"It's very important to be hydrated, to keep on drinking," a tourist said.

In Paris, tourists are trying to stay cool.

"This sun and this hot it's a little hard for our body," a tourist said.

The relief of Fall still sits more than two months away.

For Parisians and Floridians alike, it's only going to get hotter.

"It's comin', August is the worst. August is — it gets real hot," said Sean, a postal worker in Palm Beach County.