What's Going On In Ukraine? 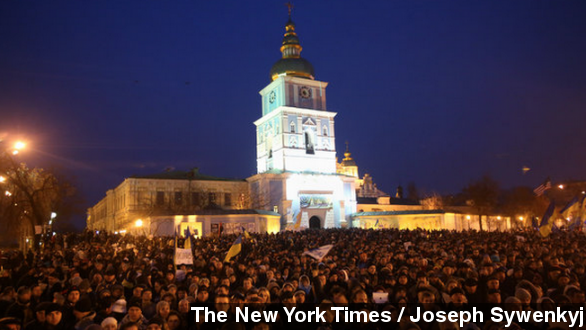 The decision by Ukraine’s prime minister to abandon an E.U. trade deal has led to violent protests across the country.

​The protests in Ukraine show no signs of slowing.  Despite a violent police crackdown over the weekend, protesters have returned to the streets, demanding their president hand in his resignation letter. (Via Channel 4)

The clashes were triggered by Ukrainian president Viktor Yanukovych's recent decision to ditch a series of political and free trade accords with the European Union. (Via YouTube / yanukovych)

These accords were five years in the making, and many in Ukraine saw them as a chance to break ties with Russia and a step toward a better economy. (Via Euronews)

Which as Businessweek's Carol Matlack explains is just barely getting by, writing: “The economy is stagnating, budget and trade deficits are ballooning, and the central bank is running low on reserves.”

As for the reason behind ​Yanukovych's surprising flip-flop, he says he was under pressure from his Russian counterpart. Vladimir Putin reportedly threatened higher import duties and a ban on some Ukrainian exports if Ukraine signed the deal.

But there could be more to it. As The Telegraph points out, some observers speculate "Yanukovych was simply holding out for better terms from the E.U. If so, that gamble may now have backfired."

What was initially a protest over the government’s decision to suspend integration with Europe, has turned into a nationwide rally calling for the president’s removal. (Via CBS)

​​By Sunday, half a million people had turned out for rallies. (Via RT)

Yanukovych tried turning things around — insisting he was still considering the E.U. pact as long as it didn't hurt the country's economy. (Via PBS)

But the damage was already done. By Monday, protesters had blocked the government headquarters in Kiev and closed off the streets. (Via ITN)

Ukraine's government faces a no-confidence vote Tuesday. It’s unclear if the opposition will have enough votes to pass the measure.