What Are Ohioans Voting For In Their Senate Race? 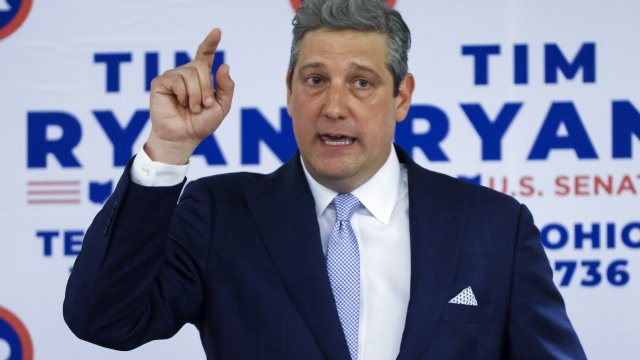 The Ohio Senate race is an expensive one — with $65 million spent in the general election according to AdImpact.

Nestled between Dayton and Cincinnati is the small city of Middletown, Ohio.

It's the birthplace and childhood home of Republican U.S. Senate candidate J.D. Vance.

Vance gained national recognition for his bestselling memoir Hillbilly Elegy, detailing his upbringing here. And as he runs for Senate, it's Ohio voters like these that he’ll need to win over in November.

"Unfortunately, people thought that that was our story," said Adriane Scherrer. "That was his story, not my story."

"I just more closely aligned to Tim Ryan," said Heather Gibson, a registered independent & small business owner. "J.D. Vance became a Trumper. There's in it to win over the hearts of probably the Middletonians. And I'm not one of those."

"After January 6, our democracy is fragile," Gibson said. "And I want people up there who are going to take that to heart and swear by their oath and stand by it.”

Since winning the Republican nomination in May, Vance has attacked Congressman Ryan over his voting record, siding with President Biden 100% of the time according to FiveThirtyEight.

Biden To Tell Ohioans His Policies Will Revive Manufacturing

Intel had delayed groundbreaking on the $20 billion plant until Congress passed the bipartisan CHIPS and Science Act.

But in the Buckeye State, where President Biden remains unpopular, Ryan urges voters to look past the things that come up for a vote in Congress.

"The point is I think for voters is Tim Ryan has agreed with Donald Trump on trade, on China, on the military, on the Space Force; and I've disagreed with Democrats on trade and on other issues," Ryan said.

According to the latest public polls, Ryan and Vance are neck and neck. One poll in early September conducted by Suffolk University and USA Today shows Ryan leading Vance by 1 point, well within the margin of error.

Already the Ohio Senate race is an expensive one — with $65 million spent in the general election according to AdImpact — and some voters have seen enough.

"It is a lot of mudslinging," says Janet Hydeman, a registered Republican. "And that does not make me happy. I would rather know what those candidates are standing for, rather than what they're trying to stamp on in the other candidate."