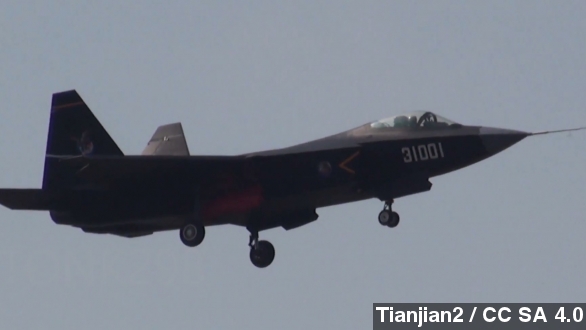 The J-31, which debuted last week amid rumors it was built from stolen F-35 blueprints, is China's attempt to grow in the international arms trade.

Last week, China debuted its J-31 stealth fighter jet at an air show in Beijing, and ever since analysts have been weighing in on what the new jet means for the country's military ambitions — and debating the rumor that it's simply a U.S. knockoff.

Chinese leaders seem intent on exporting the jet to countries trying to step up their air presence on a budget, like Pakistan, as a cheaper alternative to the American F-35. Not much is known about its capabilities at this point, but it's smaller than the F-35. (Video via CNN-IBN)

That may be true, but The Daily Beasts points out it isn't Chinese ingenuity alone that's responsible for the J-31. For one thing, the engines are Russian-made.

And the design for the J-31 is reportedly based on blueprints of the F-35 stolen from a U.S. contractor during a Chinese cyber attack in 2007. (Video via U.S. Air Force)

Although Business Insider writes there are some differences between the two. "The Chinese aircraft has smaller engines and a flatter fuselage, which implies a focus on air-to-air combat. The design means that the J-31 will have a smaller weapons bay than the F-35 — but it will have improved fuel efficiency and higher speed due to its comparatively less drag."

In addition to shopping it out to other countries, China probably has its own uses in mind for the J-31.

The plane is capable of being launched from China's lone aircraft carrier and could be potentially be used in ongoing territorial disputes with Japan. (Video via BBC)

The J-31 is a fifth generation aircraft, meaning it's among the most advanced currently on the market.