What Does 'Defund The Police' Mean? 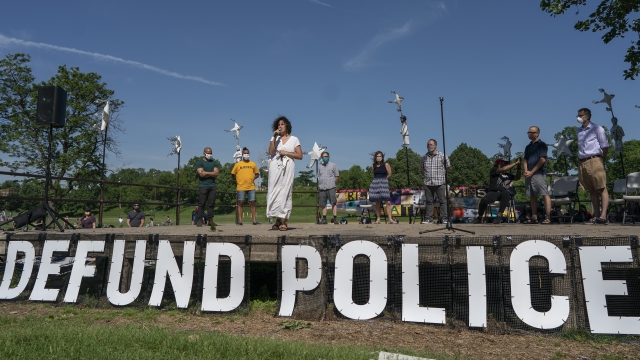 The once-obscure slogan has become a rallying cry for protesters calling out police brutality and racial disparities in policing.

Calls to defund the police have become a rallying cry for protesters calling out police brutality and racial disparities in policing. But there are plenty of questions about what that means.

Some activists are pushing for police funding to be redirected to Black communities for services like education, health care and housing. Others want to completely abolish local police forces.

Demands to defund police departments have grown increasingly loud among activists in the months after the 2014 police killing of Michael Brown in Ferguson, Missouri, though the idea seemed too radical to government officials at the time.

Now, it's gaining some traction nationwide — with the recent deaths of George Floyd, David McAtee and Breonna Taylor at the hands of police and days of protests demanding change.

In Minneapolis, officials recently announced they intend to "dismantle" the city's police force.

The city council members who've signed on to the idea represent a veto-proof majority, but the city's mayor is not on the same page.

Over the weekend, a sea of protesters yelling "shame" drove Mayor Jacob Frey out of a rally after he would not commit to defunding the city's police department.

"Yes or no: Will you commit to defunding Minneapolis Police Department?" one activist asked Frey at a protest.

"I do not support the full abolition of the police," Frey answered to boos.

The mayor is not alone. The head of the Congressional Black Caucus said she also opposes disbanding police departments but wants to instead move funds toward community programs.

"I think that part of the movement around defunding is really about how we spend resources in our country. And I think far more resources need to be spent in communities to address a number of problems," said Rep. Karen Bass in an interview with CNN. "Now, I don't believe that you should disband police departments, but I do think that in cities, in states, we need to look at how we are spending the resources and invest more in our communities."

Other Democrats support the concept. In New York City, Mayor Bill de Blasio said he will shift some money from the NYPD toward youth and social programs.

"We will be moving funding from the NYPD to youth initiatives and social services," de Blasio said Sunday at a press conference.

The presence of law enforcement was significantly reduced in cities across the country in recent days — and the protests were largely peaceful. Some activists say that underscores their belief that more cops does not equal less crime.

The movement has caught the attention of President Donald Trump, who tweeted that he opposes slashing police budgets. Some of his top law enforcement officials have also criticized the idea.

"I think there's racism in the United States still, but I don't think that the law enforcement system is systemically racist," Attorney General William Barr told CBS News. "I understand the distrust, however, of the African American community, given the history in this country."