What Happens When Political Leaders Disagree With The Pope? 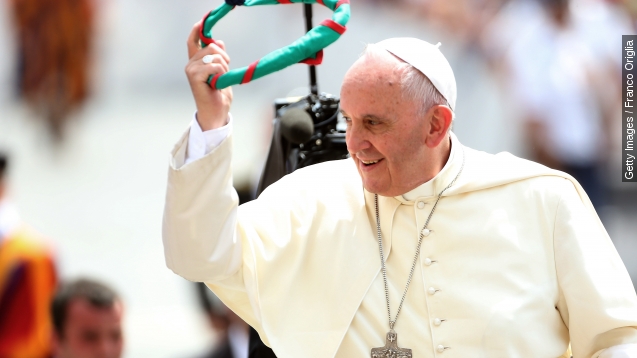 What happens when Catholics disagree with the pope, as is happening now ahead of his statement on climate change?

On Tuesday, Jeb Bush joined the list of conservatives speaking out against Pope Francis and his stance on climate change.

Answering an audience member's question about the pope in New Hampshire, Bush said he didn't get economic policy from his pope, and religion shouldn't mix with politics. (Video via CBS)

Climate change is at the center of a divide between a vocal group of conservatives and the pope, whose upcoming encyclical will likely urge to cut emissions. (Video via Vatican)

And being at odds with the pope is kind of an awkward position for a political leader, especially a Catholic presidential candidate. (Video via C-SPAN)

So what happens when leaders disagree with the pope? Historically, a lot of bad things.

The Vatican's iconic Swiss Guard first gained prominence for defending Pope Clement VII during the 16th century sack of Rome. That attack was the result of the pope throwing his political support behind the Kingdom of France, which the Holy Roman Emperor defeated. (Video via EWTN Catholic Television Network)

Then his successor clashed with Henry VIII of England over annulling the king's marriage, ultimately excommunicating him. That led the English church to break away from the Vatican entirely. (Video via Channel 4)

And Pope Pius VI opposed the French Revolution, which ultimately led to his death under imprisonment when Napoleon Bonaparte invaded Italy.

Of course, it's hard to see anything like that happening to Pope Francis, but there is another possibility. With some observers saying the pope is alienating an increasing number of conservative Catholics, a schism could occur.

As Andrew Brown writes for The Guardian, that's unlikely, but "American right-wingers are already outraged by Pope Francis’s teaching on poverty and his hostility to capitalism. If they can pose instead as defenders of sexual virtue this will exacerbate the already bitter splits within the US Catholic church."

Pope Francis has overwhelming support among Catholics internationally, but when it comes to climate change, Catholics in the U.S. are split along party lines. (Video via Vatican)

As such, the U.S. will likely see the sharpest divides when the pope releases his encyclical on Thursday.

This video includes images from Getty Images and Wellcome Trust / CC BY 4.0.