What It Means For The US To 'Deconflict' With Russia 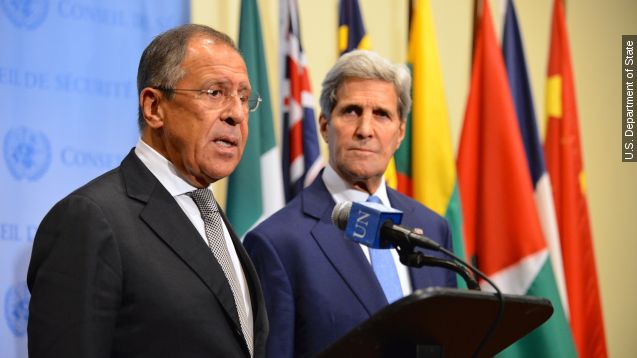 Russia's air campaign in Syria has introduced us to a new term: deconfliction.

If there's one word to sum up the Obama administration's Syria strategy, it's "deconfliction." That's military speak for making sure you don't accidentally shoot down each other's warplanes.

That's probably a good idea. Syrian airspace is a bit crowded these days.

The U.S. and its allies are targeting ISIS from the sky. Bashar al-Assad's troops are targeting civilians. And Russia's warplanes are now targeting — well, it's not entirely clear who they're targeting. Officially, ISIS and "other terrorist groups." (Videos via U.S. Central Command, Darayaa Media Center, Russian Ministry of Defense)

Most have taken that to mean the U.S.-backed rebels fighting Assad. (Video via Falcons of Mountain Brigade)

By no means, then, are the U.S. and Russia on the same page on Syria. But it is — at the very least — in both their interests to coordinate their flight plans.

Russia reportedly only gave the U.S. an hour's heads up to clear the skies before launching airstrikes Wednesday. Hence, the push for deconfliction. (Video via Russian Ministry of Defense)

"There will be these practical operational-level discussions between U.S. military officials and Russian military officials…President Putin and President Obama have acknowledged that those kinds of deconfliction conversations are a priority," White House press secretary Josh Earnest said.

Aside from the whole defeating ISIS thing.