What Makes Purdue Pharma's OxyContin Different From Other Opioids? 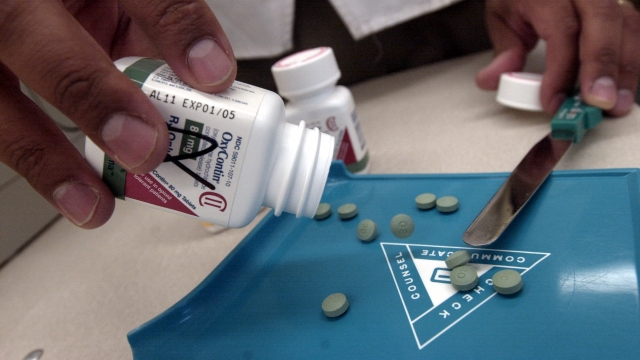 It seems like Purdue Pharma is taking more heat than other drugmakers for the opioid epidemic, and there's a reason for that.

Purdue Pharma, the maker of the brand-name opioid OxyContin, has been hit with lawsuits from all across the country. The company is accused of downplaying the addictiveness of its drug in an effort to make more money.

Doctors have been prescribing opioids for pain since the early 1900s. The opioid drug class includes those made with a variety of active ingredients, including fentanyl, morphine, hydrocodone and oxycodone, which is what OxyContin is made from.

When OxyContin got FDA approval in 1995, it was the first oxycodone drug to come in a time-released formula. That allowed patients to take one pill every 12 hours instead of one pill every four to six hours.

Another part of OxyContin's problem is how the drug was abused. People could crush the pills and then snort or inject them. Doing that bypassed the prescription's time-release formula, giving the user a stronger, more immediate high. Purdue eventually acknowledged the problem, and in 2010 it got FDA approval for a reformulated version of OxyContin meant to deter that kind of abuse.

Purdue is currently facing a barrage of lawsuits related to how it marketed OxyContin, but it's not the only opioid maker with that problem. Other drugmakers including Teva Pharmaceuticals and Johnson & Johnson have also been named in recent court cases.