What Makes Twitch Worth $1 Billion To Amazon? 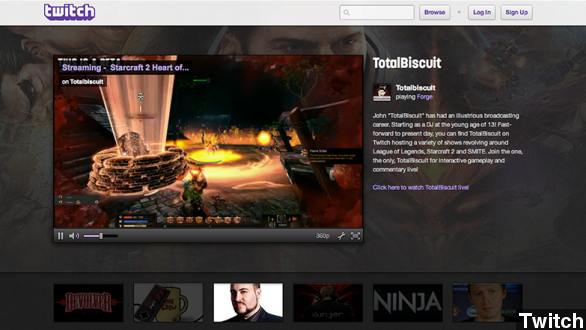 Amazon is reportedly about to purchase Twitch, a streaming service for video game players, but why?

Amazon's never been shy about dropping big bucks to nab a company it thinks can broaden its reach. But its latest acquisition is a bit of an eyebrow-raiser.

Amazon will purchase Twitch, a live-streaming service for video game players, according to Twitch's CEO, and The Wall Street Journal reports that Amazon is shelling out $1 billion to get its hands on the company.

Google was rumored to be in talks to buy Twitch for the same amount earlier this year but those talks reportedly went cold.

For all you non-gamers, Twitch is a service that allows people to stream themselves playing video games.

So why is that worth $1 billion to Amazon? Well, the service has a staggering audience size.

Twitch had 45 million users by the end of 2013, many of whom were spending an average of more than 100 minutes a day on the site.

What's even more impressive is that a Sandvine report revealed Twitch accounts for 1.35 percent of all Internet traffic. That puts it ahead of some well known brands like HBO GO.

In fact, ad revenue and user donations are so good on the site that some people, such as this streamer known as TrumpSC, have made streaming video games their day job. Admit it: your 11-year-old self would be pretty jealous.

So what does Twitch do for Amazon? Re/Code points out it provides them with an "attractive but hard to reach shopper demographic," young men. The site had already been bulking up it's video advertising in recent months, so this move makes sense for the company.

It's clear Twitch has been wanting a buy-out for a while now. Earlier this month, it cleared out thousands of recordings containing copyrighted audio from the site in an effort to look less of a legal risk to buyers. As Ars Technica points out, that move angered a lot of Twitch users.

It's not so clear what the purchase means for Twitch. Amazon could leave it as-is, like Facebook did when it purchased Instagram, or there could be big changes on the horizon for the gaming community's favorite hangout.