What Really Happened When Rob Ford 'Attacked' A Councillor? 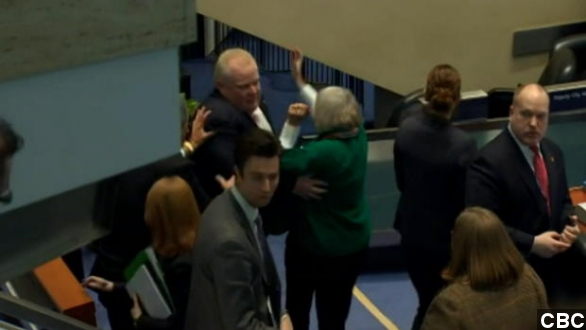 The embattled Toronto mayor knocked over a city council member while charging across city hall.

McConnell left with a fat lip and demanded an apology. But she wasn’t Ford’s target.

Instead, Ford told the council "I rushed over there because my brother was in an altercation" before apologizing to McConnell. (Via NBC)

USA Today reports members of the public, who were watching the meeting, began chanting “Shame!” at Ford and his brother Doug, who’s also a council member.

Again, Ford says his run-in with McConnell was a complete accident. You can see he helps her to her feet after knocking her down. (Via CBC)

In the end, it was Ford that was really taken down. The city council overwhelmingly voted to remove some of his remaining mayoral powers, taking away much of his staff and budget. (Via CTV)

And Ford, of course, had something to say about that, calling the situation a “coup d'etat.” “You guys have just attacked Kuwait. This is going to be outright war in the next election.” (Via National Post)

But perhaps we should’ve expected this type of response?

In the past week, Ford has admitted to smoking crack, driving drunk and buying illegal drugs. He also denied allegations he pressured a female staffer to engage in oral sex. And still, he has refused to resign or take a leave of absence. (Via CNN)

In fact, the people of Toronto have a chance to see even more Rob Ford. His new show, “Ford Nation,” premieres Monday at 8 p.m. ET on Sun News Network.