What's A Presidential Endorsement Worth These Days? 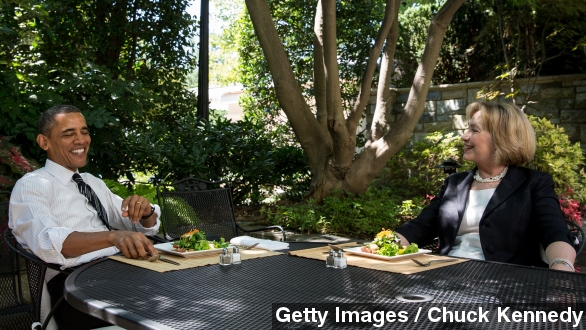 During President Obama's interview on ABC's "This Week," he said Hillary Clinton would be "a great president" if she decided to run in 2016.

Hillary Clinton, you have a big-time backer, and he would seem, on the surface, to be the perfect fit.

A former opponent, your old boss, the most powerful person in the free world. And hey, he even came with a slogan ready-made for your campaign on Sunday's ABC "This Week." (Video via The White House)

"I think she'll be a formidable candidate," President Obama said, noting Clinton has yet to announce a possible 2016 presidential candidacy. "I think she'd be a great president. ... I think the American people, they're going to want that new-car smell. They want to drive something off the lot that doesn't have as much mileage as me."

Hillary Clinton, the new-car-smell candidate. It has a certain ring to it, doesn't it?

Clinton's kept herself busy touring and promoting her book "Hard Choices," published this summer, and has said she won't seriously consider a presidential run until 2015, though she has teased us. (Video via WPRI)

"Do you have a favorite shape for that home office?" Jon Stewart asked on Comedy Central's "The Daily Show." "Would you like it to have corners or not to have corners? I don't know."

"The world is so complicated, the fewer corners you can have, the better," Clinton answered.

But an endorsement from the commander in chief doesn't exactly seem like the kind of thing politicians and prospective politicians seem to be pining for just now.

The president's recent executive order on immigration aside, his cornerstone programs like the Affordable Care Act have kept his approval ratings much lower than you'd likely hope for if you're receiving his endorsement. (Video via The White House)

In fact, it had several outlets reporting Democrats in hotly contested districts tried to distance themselves from the president leading up to this month's midterms. Others noted exit polls showed Obama did, in fact, hurt Democrats' chances at holding the Senate and not losing ground in the House.

Gallup polls show Obama's approval ratings have consistently hovered in the low to mid-40s in 2014 with the most recent low mark of 40 hitting the week of the midterms. Now, that's not as low as his predecessor who had a 36 percent approval rating during his second set of midterm elections in 2006, but the comparisons have already begun. (Video via CNN)

The Christian Science Monitor points out, "George W. Bush, you will recall, didn’t do much campaigning for John McCain in 2008. Or any, for that matter. ... Mr. Bush was down in the polls, tarred with an unpopular, costly war becoming the longest in US history."

Obama hinted as much may happen in 2016 during the ABC interview, regardless of whether the prohibitive Democratic favorite Clinton is running.

The president told George Stephanopoulos, "I think at the end of two years, if they want me to do some selective things, I'll be happy to do them, but I suspect that folks will be ready to see me go off to the next thing."