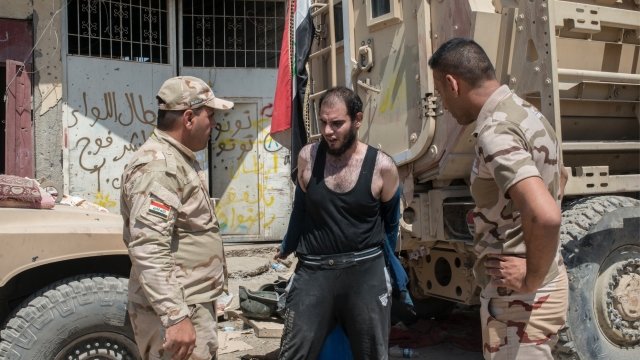 Anything from providing a phone to providing weapons can fall under the "material support" law.

Just about every time the feds nab an alleged aspiring terrorist, you hear the same three words when the charges are read: "providing material support" to terrorists.

That charge makes intuitive sense if they're wiring money to ISIS headquarters, but those words actually cover a broad range of activities — even intentions.

Let's start with the letter of the law: Title 18 of the U.S. Code, Section 2339A, which deals with criminal procedure. "Whoever provides material support or resources or conceals or disguises the nature, location, source, or ownership of material support or resources, knowing or intending that they are to be used in preparation for, or in carrying out, a violation" of any portion of 37 different laws.

What's included in that? Providing terrorists with "property, tangible or intangible, or service," plus currency, phones or computers. Add to that explosives and giving them personnel or a car.

US Reportedly Starts Withdrawing Troops From Iraq After ISIS Defeat

A spokesperson for the Iraqi government told the Associated Press and Reuters the drawdown is still in early stages.

Then you have training, maybe in combat or explosives — that's also banned. Plus, lending expert advice based on scientific, technical or specialized knowledge. If someone is convicted of this they could face up to 15 years in prison or, if the terror attack involves a death, life in prison.

There are two notable carve outs in the law, covered by the First Amendment. It is legal to contribute medicine and religious materials. Now, a more narrow portion of the law, Section 2339B: providing material support to a "designated foreign terrorist organization," which is the most widely used.

These are known groups with violent intentions, the list maintained by the State Department. Boko Haram was added in 2013, ISIS in 2014. If someone is caught providing support to these groups or a bank facilitates the process, the penalty is even stiffer. The bank gets fined $50,000 per infraction.

An individual could face up to 20 years in prison or life behind bars if someone is killed by the group. One caveat: The person must know the group is a designated terror organization.

Researchers at American University found that since 9/11, Section 2339B has been the most widely used — and successful — law to prosecute suspected terrorists: "The government charged 318 individuals and successfully convicted 263 under these statutes."

Some intended to travel to Syria, some were sending money, some may have been planning attacks, but all were found to be "providing material support" in some way under this short yet expansive law.