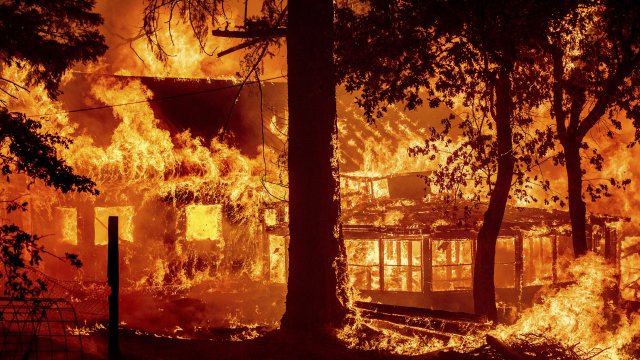 Fire season normally follows the heat of the summer, but now it's stretching nearly year-round.

Wildfires are raging in the West, burning more than a million and a half acres and counting. 20,000 firefighters and emergency crews are battling the blazes.

Fire season normally follows the heat of the summer, but now it's stretching nearly year-round. Fires start months earlier, changing what we thought we knew.

We start about 90 percent of all wildfires, either accidentally, like when an electric line falls and ignites a tree, or carelessly, when someone throws out a cigarette butt or leaves a campfire burning. And some do it on purpose: arson.

Lightning and, believe it or not, lava are responsible for the rest.

Fires need fuel. They burn extremely dry trees, leaves and ground debris. It's exactly what you find in a forest during a severe and extreme drought, like the one gripping almost all of the western U.S.

Climate change is making it worse. The temperatures are above normal, and not just for a day, but for weeks and weeks. High pressure ridges just sit there, trapping hot air. Heat waves dry everything out, evaporating the moisture from the ground and plant life. Then comes a spark, and the start of what scientists call a feedback loop.

Some say alert systems not working fast enough to give people time to escape but officials say cell service outages may cause delays.

Here’s the part Smokey leaves out: the fire sending hot air, pollutants and some water vapor up into the atmosphere, forming pyrocumulus storm clouds...but they don’t have a lot of rain. They do have lightning, which ignites new fires when it hits the ground, creating more storms, creating more lightning, creating more fires. Around and around it goes. Government agencies use forest management to moderate fires. They thin out or remove trees, creating breaks in the canopy, reducing the spread of major fires, and protecting the forest. Or even carefully setting fires to eliminate the dead debris on the ground. There are 741 million acres of forests in the U.S. And it's impossible for people to manage every acre. But mother nature’s been doing it since the first forest formed, using wildfires. The difference is today’s fires are driven by climate change: higher temperatures, extreme drought, and humans — in more ways than one.