What's The Holdup For Kids' Vaccines? 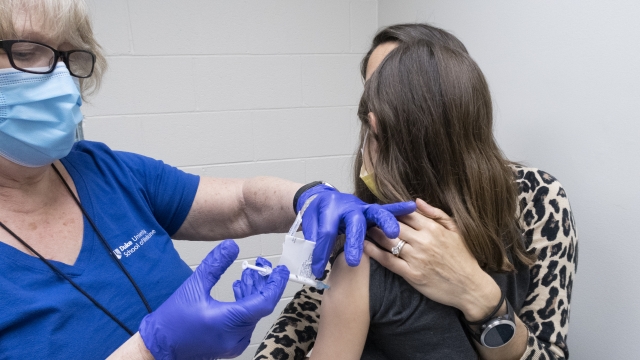 Right now, a child under 12 can't get a COVID vaccine unless they're part of a clinical trial.

Seven-year-old Clark McGinnity and his nine-year-old brother Henry are both participating in the Moderna COVID-19 vaccine trial.

Right now, a child under 12 can't get a COVID vaccine unless they're part of a clinical trial. It comes down to dosing-balancing a shot's protection without causing severe side effects.

"I don't think it's taking longer than it did on the adults," pediatric infectious disease specialist Mike Smith said. "But people need to understand that it's a whole separate set of studies because the dose is different."

We spoke with Dr. Michael smith. He's involved in the pediatric trials of Pfizer's COVID-19 vaccine.

Just like the adult COVID trials in previous months, they start with smaller phase one clinical trial groups to get the dosing right.

"I'm a parent of two children who are both under 12, so I share this concern," Smith said. "I really wish my kids were vaccinated. However, I also want to make sure they have the right dose."

Smith says the Pfizer dose for kids under 12 is about a third of the dose for everyone else. For Moderna, it's about a half of the full adult dose.

Those phase one dosing trials are still monitoring longer-term safety data right now, as the phase two and three are underway, too.

With those, half get a saline shot and the other half get the real thing. The double blind studies are the credible gold standard.

Charles Mugera's eight-year-old son, Christian is participating in the Moderna trial in Baltimore.

"I think for the children, ultimately, what was the most appealing to them was the fact that they got their life back," he said.

Mugera – a doctor – gets the risks and the continued monitoring-a crucial piece of the vaccine timeline puzzle.

In these trials, parents will follow up for months after their child's second vaccine, checking in daily to record any side effects like fever or soreness.

Each of those check ins mean multiple data points. On top of blood draws and antibody numbers – all pieces the researchers, then drugmakers, then FDA will go through

To request emergency authorization for kids under age 12, companies need to turn in four-to-six months of safety results. For the adults, only two months were needed.

"I think the FDA is doing their job here," Smith said. "It's just that they're kind of stuck in a hard place because you're in the middle of a public health crisis."

One thing we haven't heard much about, when would something like nasal mists for kids – like we see for flu season, for example – be a possibility.

Scientists say that would take much longer – a couple of years.