What's The Point Of Climate Conferences? 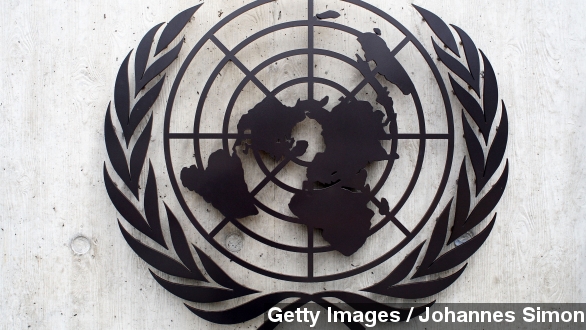 The United Nations conference on climate change in Paris is more than a year away, but already there's optimism that world leaders might actually reach a substantial agreement.

To understand why that's such a big deal, it's worth looking at conferences that have come before.

Berlin, Kyoto, The Hague, New Delhi, Montreal, Copenhagen, Durban, Doha — these are just a few of the cities that have hosted a United Nations climate conference since 1995, and during that time global carbon emissions have continued to rise.

September's climate summit at the U.N. headquarters in New York featured more than 120 world leaders, making it the biggest summit yet. (Video via United Nations)

But for all that, how many substantive agreements has the U.N. produced?

The only agreement you might have heard of is 1997's Kyoto Protocol.

It went into effect in 2005, and the first four-year commitment period started in 2008 — during which some 37 countries, along with the European Union, were meant to reduce emissions by around 5 percent from 1990 levels. (Video via TakePart)

In all, 192 countries signed on to the agreement, but global emissions continued to rise because of a notable absence: the United States.

At the time of the Kyoto summit, the U.S., followed by China, was the world's biggest polluter when it came to greenhouse gas emissions, and it was reluctant to agree to a uniformly binding deal. (Video via American Lung Association)

But now, those two countries have brokered their own agreement, which aims to reduce the U.S.' emissions 24-26 percent from 2005 levels by 2025. (Video via The White House)

China's side of the agreement is a little less binding: It has to peak its emissions by 2030, by which time it also has to produce 20 percent of its energy from renewable sources. (Video via DuPont)

Not only has the U.S. agreed to the China deal, it's also pushing the issue globally. At the most recent G20 summit in Brisbane, President Obama focused on climate change, despite behind-the-scenes pushback from his host, Australian Prime Minister Tony Abbott. (Video via Sky News)

"You'll recall at the beginning I said the United States and Australia has a lot in common. Well, one of the things we have in common is we produce a lot of carbon … which means we've got to step up," President Obama said.

With that in mind, it's easy to see why Paris 2015 — where world leaders are expected to draft a new protocol on climate change — is getting so much attention.

Thousands of demonstrators turned out in the French capital to protest the perceived ineffectiveness of such meetings ahead of September's summit in New York — a reflection of the skepticism climate conferences tend to draw. (Video via Press TV)

But there is optimism and, importantly, urgency about next year's conference, as Bloomberg's Michael Liebrich explains. (Video via Bloomberg)

"The science, technology, economics, and finance all point to a deal being more likely in Paris in 2015 than in Copenhagen in 2009. It will be more significant than the largely meaningless Copenhagen Accord."

However, Liebrich doesn't expect any accord to keep the global temperature from increasing more than 2 degrees Celsius — the benchmark established in Copenhagen to define “dangerous” climate change. (Video via Cop15)

And as Vox points out, "Recent analysis by MIT researchers looked at what was realistic to expect from countries in terms of emissions pledges. … The 2015 pledges would fall short of the cuts needed to stay below 2°C of global warming."

And if previous climate conferences have shown us anything, it's that when it comes to optimism — the bar is set very, very low.

The hype about Paris has all but overshadowed the U.N.'s next climate conference which will be taking place in Lima, Peru in less than a month — a conference which has cost the country millions of dollars to organize. It begins Dec. 1. (Video via Interior Ministry of Peru)