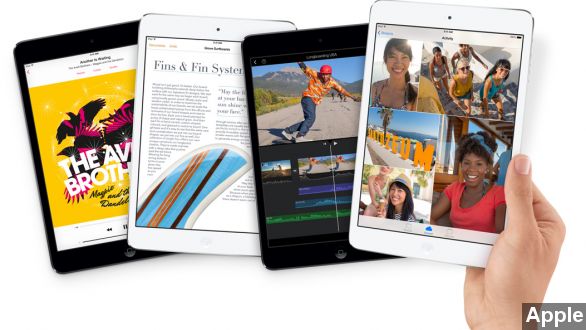 ​If you didn't know Apple released its new iPad Mini with a retina display Tuesday — join the club. The release was pretty quiet, especially for Apple, as the product simply became available for sale with none of the typical fanfare involved.

“Apple had previously said it would go on sale this month, didn’t give a specific date but now it's out there. Apple’s stock isn’t really moving on the news.” (Via Fox Business)

But there’s a catch, you can’t actually buy the mini at Apple’s retail stores — it’s only available through online order.   (Via Los Angeles Times)

This soft launch could have easily been missed. So, what's with the lack of the typical Apple hoopla?

In a recent statement, Philip Schiller, Apple’s senior vice president of Worldwide Marketing said, “The response to iPad Air has been incredible, and we’re excited for customers to experience the new iPad mini with … Retina display. We’re working hard to get as many as we can in the hands of our customers.” (Via Apple)

Ahh, that last line might be all the explanation needed. As The New York Times points out, it seems, even without a huge promotional push on drop day, there’s just not enough to go around.

It has been evident that Apple was struggling to make enough iPad Mini tablets for the coming holiday season. Timothy D. Cook, Apple’s chief executive, said on the company’s recent earnings call that it was 'unclear if we will have enough' of the devices this quarter. ​

So, perhaps efforts to increase demand are unnecessary — sales will primarily depend on production rate. So what is it about the mini that seems to be slowing down production? (Via Apple)

Could it be the a7 processor and 64-bit chip, making it faster and more power-efficient? Could it be the hefty price tag starting at $329? Nope, apparently it's the huge selling point, that retina display, that’s the issue. (Via KNBC)

According to some reports Apple is "having issues producing enough of the smaller Retina displays to satisfy expected demand for the product.” (Via Daily Mirror)

The mini is available in silver and gray and is also being sold through AT&T, Verizon, Sprint and T-Mobile.