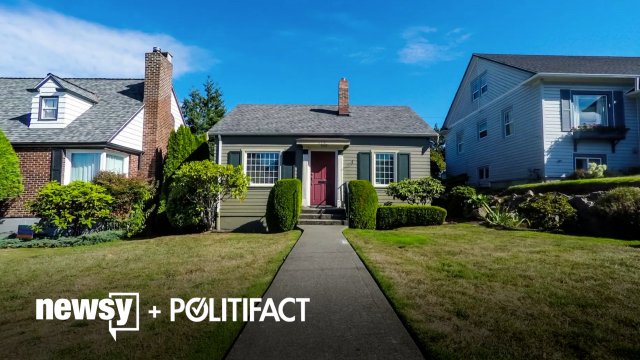 Unemployment in the U.S. is at near-record lows. But that doesn't mean the middle class is as strong as ever. We sorted fact from fiction.

Hey everybody and welcome to "What The Fact." I'm Aaron, this is Katie, and we're editors with PolitiFact. We're sorting out fact from fiction, and we did a little bit of a road trip, right Katie?

Yeah, we took a field trip to Iowa for the Polk County Democrats annual steak fry. This was a huge event that attracted 17 Democratic candidates for president. We were trolling, listening out for fact checks, claims we could fact check.

Yeah, and one that caught both our ears was something Joe Biden said about middle class income that we hadn't really heard before. Take a listen.

"Today the majority of middle class can't look their children in the eye. They don't think they can say 'It's going to be OK.' They don't believe that their child will do as well as they did. We have never, ever had that happen in America. We're no longer the largest middle class in the world."

All right Katie, so when Joe Biden made those comments we texted each other immediately — we're at different ends of the steak fry — because we wanted to check that claim that we're no longer the largest middle class in the world.

Yeah, so we're going to do a fact check but first we're going to find out what do we know about the size of the middle class? One thing that we learned from Newsy is that it's shrinking.

Politicians on both sides of the aisle talk about supporting the middle class. But in the U.S., that group is shrinking.

Pew Research Center data shows that in 1971, 61% of adults lived in middle-income households. By 2016, that number was down to 52%. So what income bracket were those people absorbed into? Before 2000, people leaving the middle class were more likely to join the upper class. But after 2000, the opposite was true — people were more likely to drop to the lower-income group.

So why is the number of middle-class Americans decreasing? There are several factors.

Wage growth has a direct impact on pocketbooks. Since the great recession, wages have been going up, but pay rates for the highest earners have gone up faster than others. And the top 1% has seen significantly higher wage growth than everyone else.

Then there's the cost of everyday needs. Health care costs, like prescription drugs and visiting the doctor, have risen faster than the median income in the U.S. The same is true for child care, housing and education.

And while plenty of families have stayed in the middle class, a growing number are going into debt to do it. Americans as a whole now have over $13.8 trillion in debt — a number that's gone up nearly every quarter for the past six years.

Economists, politicians and other experts have a variety of ideas to help strengthen the middle class. Those include increasing the minimum wage, providing paid family or sick leave and creating tax benefits to help the middle class.

Okay Katie, so now back to Joe Biden. He said we are no longer the wealthiest middle class in the world. How does the truth-o-meter rate that claim?

Yeah there are three things I want to point out. First, we're not talking about wealth the way Joe Biden said it. We're actually talking about income. So how much money you're making versus how much money and possessions you have. Second, this is a study that comes from a group called LIS. It looked at data from 2010. Now, the data is sound, but basically what it found is that Canada tied the United States when it came to median income. And the researchers say that by now, Canada has passed it.

So that's what Biden was referencing, but there's another study as well.

Yeah, No. 3, there's more research from the Pew Research Center that basically looks at average household income, and what it found is that a couple of European countries are now doing better than the United States. One of them is really tiny, Luxembourg. The other is a little bigger, Norway. So those are the main reasons why this ranks mostly true, but I think there's a little bit more context as to why this is happening. In the New York Times story, which is about the thing that Biden was citing, they said that the U.S. educational attainment rose more slowly than other industrialized countries. American companies don't distribute as much of their profits to their workers as other places do. And Americans comparatively receive smaller raises than around the world.

Yeah, the economy is going to be a big issue, not only in the Democratic primary but all the way through Election Day.

You can see more of the latest at Politifact.com.

More from What the Fact

What The Fact: Testing For Coronavirus

Curious who pays if you get tested for coronavirus? PolitiFact helps us clear it up.

What The Fact: Analyzing Support For Gun Background Checks

What The Fact: A Guide To Primary Voting

Confused about the difference between open primaries, semi-open and closed? Let us explain.