Trump Tells McConnell To Consider 'Nuclear Option.' What Is It? 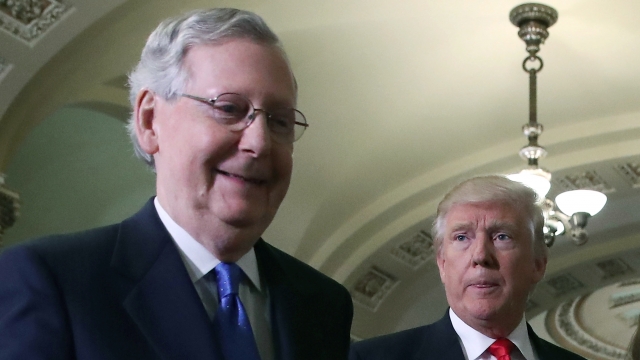 President Donald Trump made the comment before meeting with leaders of groups that support his Supreme Court nominee.

"But if we end with that gridlock, I would say, 'If you can, Mitch, go nuclear,'" President Donald Trump said.

Right now, it takes 60 votes to confirm a Supreme Court nominee. Imposing the nuclear option means confirmation would only take a simple majority of votes: 51. That would essentially end filibusters.

Senate Democrats said they would filibuster the nomination of Trump's Supreme Court nominee before the president even announced his pick.

"This is not a normal consideration. This is a seat that was stolen from the former President Obama. That's never been done in U.S. history before. To let this become normal just invites a complete partisan polarization of the court from here to eternity," Democratic Sen. Jeff Merkley of Oregon said on MSNBC Tuesday night.

If Senate Republicans go for the nuclear option, it would apply to future Supreme Court confirmation votes. And they could end up regretting it — just as Senate Democrats have said they do.

President Donald Trump made the announcement in a live address Tuesday night.

In 2013, Senate Democrats imposed the nuclear option on filibusters for most other presidential nominations.

Trump said of Gorsuch, "That would be a absolute shame if a man of this quality was caught up in the web."

Trump made the comments before meeting with leaders of groups supporting his Supreme Court nominee Wednesday.