What Will Baghdadi's Death Mean For The Future Of ISIS? 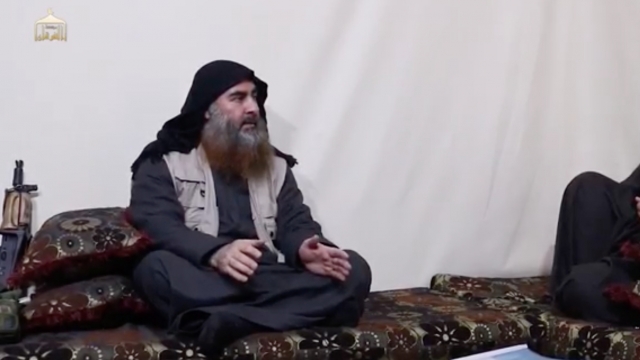 Newsy spoke to multiple experts, and they all agreed that Abu Bakr al-Baghdadi's death is a symbolic blow for the Islamic State.

U.S. military forces killed the leader of ISIS. But how will Abu Bakr al-Baghdadi's death impact the terrorist group?

Newsy spoke to multiple experts, and they all agreed that Baghdadi's death is a symbolic blow. In the immediate aftermath, Dr. Asaad Almohammad with the George Washington University Program on Extremism told Newsy everything was "business as usual" for the Islamic State's official media channel. He said other ISIS leaders are likely laying low to avoid becoming targets themselves.

But a delayed response to big news isn't unusual for ISIS. Dr. Colin Clarke, a senior political scientist at RAND, said the group is probably trying to figure how to spin the news and inspire more followers. He said Baghdadi's ability to recruit for ISIS was "unprecedented."

The group had largely been defeated in in Syria and Iraq. But recently it's seen a bit of a resurgence, and there's been concern that the Islamic State would capitalize on the unrest caused by Turkey's invasion of northeastern Syria. Clarke argues ISIS was building momentum there and Baghdadi's death is a blow to that.

Explaining The Conflict Between Turkey, Syrian Kurds And The U.S.

A change in U.S. policy increased tension in Syria's northeast region. So let's look at the three key players and what each group wants.

The raid that killed Baghdadi prompted comparisons to the 2011 death of Osama bin Laden. The Obama administration oversaw a U.S. military raid in Abbottabad, Pakistan, that killed the Al-Qaeda leader. In recent months, the organization of ISIS started to look more like Al-Qaeda's, with a decentralized network of groups.

"A specific leader, be it bin Laden in that case or Baghdadi in this case, is only important as a figurehead. And removing one leader doesn't change the facts on the ground," said Dr. Barnett Koven, senior researcher at the University of Maryland's National Consortium for the Study of Terrorism and Responses to Terrorism.

A recent U.S. government report estimated ISIS still had between 14,000 and 18,000 members in Iraq and Syria. Clarke said Baghdadi's impact had been decreasing, but he wasn't insignificant or marginalized. Once ISIS picks a new leader, its attempted resurgence is likely to continue.

Almohammad said: "No matter who comes next, their work will be cut out for them. This includes rift with other jihadi groups, internal disputes between members of the organization, commanding distance branches of the Islamic States, not to mention ongoing counterterrorism efforts."