What You Missed From The Panthers-Patriots MNF Controversy 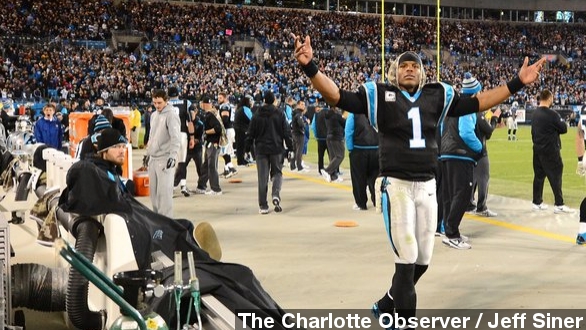 The Carolina Panthers win their sixth-consecutive game, beating the New England Patriots on a controversial call.

The Carolina Panthers bested the New England Patriots 24-20 during Monday Night Football, but a lot of buzz has been brewing around what happened at the end of the game.

Here's Patriots QB Tom Brady giving referee Clete Blakeman an earfull after what he presumably thought was a botched call — Brady tried to find Rob Gronkowski in the end zone during the last play of the game, but the pass was picked off. (Via ESPN)

Panthers linebacker Luke Kuechly is seen holding Gronk in the end zone before the pass is intercepted. The refs threw a flag for pass interference, consulted one another then retracted the call because the ball was underthrown. Game over. (Via USA Today)

That led to Brady's blow up and an audible F-bomb, but did he have a right to be upset?

Opinions on the matter are pouring in and a writer for New York Daily News says "Brady's beef may be legitimate" because the replay "showed Patriots tight end Rob Gronkowski being interfered with in the end zone, preventing him from coming back toward the underthrown ball."

Blakeman defended his crew's call after the game saying the contact came at the same time the underthrown ball was intercepted. But maybe the bigger story from Monday night was how the Panthers played and how QB Cam Newton put the team on his back.

Through Week 11 of the 2012 regular season, the Panthers had already lost eight games. (Via The News & Observer)

The tale of this season is much different; the Panthers are 7-3 in regular season games and are eyeing postseason play. The 24-year-old Newton went 19 of 28 for 209 yards, threw three touchdowns and had a SportsCenter top-10-worthy rush from the pocket. Newton eluded several Patriots defenders and gained 14 years on this first-down run. (Via Sports Illustrated, CBS Sports)

The Panthers will look to extend their record and move to seven consecutive wins Sunday when they take on the Miami Dolphins.