What You Need To Know About Obama's Fix To Obamacare 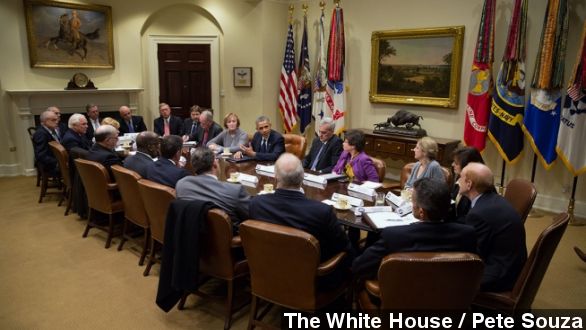 In response to criticism, President Obama proposed changes to the Affordable Care Act which could allow people to renew cancelled policies.

President Obama met with a group of health insurance CEOs Friday to discuss his proposed changes to the Affordable Care Act, or Obamacare. The president says he plans to alter the law in response to a wave of criticism from Americans who've lost their insurance policies under Obamacare.

The trouble began when people started receiving cancellation notices from insurance companies in the mail. Many individual plans offered on the old markets had to be significantly altered or updated to comply with the Affordable Care Act's new insurance marketplace. (Via The Daily Caller)

But according to President Obama, those cancellation notices weren't supposed to happen. The president promised several times throughout his term that people could keep their health insurance plans if they wanted to under the new law. (Via YouTube / WashingtonFreeBeacon)

After facing political and public backlash for those cancelled policies, the President stated Thursday he'll uphold his promise, and allow people to keep their plans for another year.

"I said that we'd do everything we can to fix this problem, and today I'm offering an idea of how to do it." (Via The White House)

How's he going to do this? Well, by not doing anything. The White House says it won't punish insurers for selling non-compliant healthcare plans for one year. This gives insurance companies the option of renewing the lapsed policies. (Via The Washington Post)

But here's the catch: insurance companies don't have to reissue their cancelled policies if they don't want to. And as The New Republic writes, most insurers probably don't want to.

"Restarting a cancelled plan would take time and work, at a time when carriers are trying to restructure their options to maximize profits ... If insurers thought renewing a policy was a worthwhile effort, chances are good they would have taken advantage of the existing authority to do so."

A writer for Mother Jones says Obama is "basically daring insurers to go ahead and reissue the old policies. If they don't do it, it means that Obamacare was never really responsible for the cancellations in the first place. And if the insurers see that their bluff is being called and decide they don't want to take the PR hit, then the old policies get reissued and everyone is happy."

Unsurprisingly, many insurance execs were not very happy about the President's announcement.

"This is nothing more than the President throwing the hot potato, the political hot potato about cancellations, back to the insurance companies. And he puts them in a hell of a mess." (Via CNBC)

And as New York Magazine points out, most of the individual policy-holders complaining about cancelled plans are the healthy young people the president needs to sign up on the exchanges. Allowing those people to keep their old plans "would leave the exchanges with a sicker pool of customers, eventually driving up rates."

So even if the President's fix works, the people keeping their plans will probably have to switch over at some point. And a Slate writer argues, that should end up being a good thing.

"The standard practice was to earn a profit selling peace of mind to healthy people, only to pivot as quickly as possible toward cancellation of the plan as soon as major bills started coming in. The ACA, rightly, puts a stop to this scam. ... The wave of cancellation letters is part of Obamacare doing what it was supposed to do."

Of course, the president isn't the only one with ideas on how to fix the Affordable Care Act. Earlier Friday, House Republicans passed a bill with support from 39 Democrats that would allow insurers to reissue cancelled plans. The White House has threatened to veto that bill.